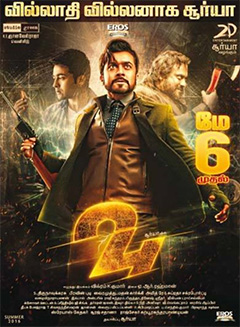 I wasn’t a fan of Vikram K. Kumar’s Manam two years ago, Telugu film which reunited three generations of Akkinenis on screen, released just a few months after patriarch Akkineni Nageswara Rao passed away. In 24, Kumar does the opposite— putting a Suriya playing three roles. They’ve one-upped anyone who’s played a double role this year *cough* but they’re still short of Kamal Haasan.

In 24, we meet watchmaker and scientist Dr. Sethuraman (Suriya clean-shaven with glasses) who, as destiny would choose, was ready to discover the secrets of time-control when the feather of a mystery eagle accidentally drops into his watch fuel-concoction. Mystical science gives way, when his evil twin brother Athreya (Suriya with facial hair) arrives to the doctor’s house, looking for the powerful invention to control time.

To save his son, Mani (played by a clean-shaven but youthful Suriya as a grown-up), Sethuraman leaves him with Sathyabama (Ponvannan), a woman he finds on a train, changing everyone’s lives in the process. 26 years later, Athreya is back looking for the watch that wrecked everyone’s lives and Mani has no idea about it.

Indian films can be a handful, and 24 is one of them— despite the sci-fi thriller label, you’re also treated to romance (and hence some musical) and family drama, as even Sathyabama, who may be described as merely “the hero’s stepmother” gets her own background and storyline. Clocking at 2.40hrs (hopefully no puns intended), it could clearly use a trim for a better thriller experience, but by losing the family drama, we’re losing Mani’s character backbone and depth. However, I do admit, I could do without much of the romance in it [Naan Un], despite Prabhu’s entertaining, though a bit ditzy, demeanor.

What makes much of the film is Suriya’s performance, who also produced the project. He’s almost unrecognizable as the three characters to the point that it sometimes is distracting trying to figure out they’re the same person. He’s both silly and your typical Marty Stu masala hero as the young Mani, trying to figure out the magical science of this time-controlling watch, but he’s the chosen one so he can do everything from figuring out plans he’s not privy to or modifying technology his father probably took ages to master. He’s good as Sethuraman, but he’s brilliant as the bad guy because, well— bad is always fun.

Kudos to the special effects team that worked on the film for the seamless actor swapping [spoilery VFX reel]. There’s many twists and turns throughout, making it an enjoyable journey. Pure fun!

Boy do I have a Nithya Menen bias. I though she was pretty good as Mani’s mother and Sethuraman’s wife. She also sang the Telugu version of the lullaby [1], Laalijo [audio].

You can listen to the Jukebox in Tamil and Telugu, with music by A.R. Rahman.