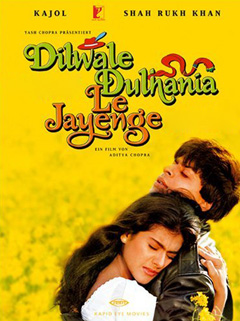 So this is it- my first EVER review of a proper Indian film. Included in Jenna’s Beginner’s Guide to Indian Cinema, Dilwale Dulhania Le Jayenge will not only be sending me on my Indian film journey, but also opening my world to the amazing on-screen presence of Shahrukh Khan and Kajol.

The film’s plot is simple and straight forward enough- a proper girl, Simran (Kajol), of an Indian family living in London is betrothed to her father’s, the very traditional and India homesick Mr. Singh (Puri), friend but before she leaves London, Simran sets out to tour Europe with her girl friends.

Accidentally, she meets Raj (Khan) a love butterfly player-player who lives in London with his father, the self-made rich ex-Indian farmer Mr. Malhotra (Kher), who upon finding out his son is in love with a woman betrothed to someone else, urges him to go get her.

My first cultural shock was to find that as simple as DDLJ may be, it’s a really REALLY EXTREMELY long film. I had no idea that Indian films were this long, as I found out in other viewings, so as the days have passed I’ve let go of that shock of the 3hr. movie- it actually serves its purpose to build up the characters rather well. Though I found Khan’s character not very likable in the first half of the film, I did warm up to him and cheered by the second half, which boasts more comedic moments. Kajol probably gives the most comedic moment in the whole film during the performance of Zara Sa Jhoom Loon [1], which has her strutting through Switzerland more than a little tipsy. This alongside her tomboyish self in Kuch Kuch Hota Hai and her ‘old’ generation homesick and worrisome Indian mother in Kabhi Khushi Kabhie Gham… has already placed her in my list of all things awesome.

Musically, it’s very understandable why people would still attend screenings of DDLJ to sing along to the songs- they’re really catchy tunes, even if they’re completely impossible to pronounce for me. Surprisingly, the musical sequences in the film don’t feel so much like filler content — the beginning songs feel a bit like it though — but the sequences for Zara Sa Jhoom Loon and Ho Gaya Hai Tujhko [1], both move the characters forward, while Mehndi Laga Ke Rakhna [1] and Tujhe Dekha To [1] boast of visuals to make DDLJ essential viewing for lovers of world cinema.

The film isn’t just merely romcom fluff, though, as it explores elements relating to the diaspora of immigrants — in this case, Simran’s father… a very scary looking Amrish Puri who never feels like he belongs in England, comparing his situation with that of the pigeons he loves to feed, his prejudice over the land that has him as guest, as well as the prejudice towards those who have embraced it as part of themselves.

Overall, though, I do wish Dilwale Dulhania Le Jayenge could have been -at least- 30min. shorter than it currently stands at. It would be a much easier recommendation. Or as a consolation, I would have liked Kajol’s character to be a bit more proactive in the second half of the film, because it seemed like all her personality had been used during her character build up. However, I do understand that the second half of the story is set up in a way for Raj to win us all over to make that title “The Brave Hearted Will Take Away the Bride” come true.

Note: The other culture shock was seeing Kajol’s really VERY long eyebrows, which at certain angles do look like a unibrow. I’ve already moved passed it, and so should you.