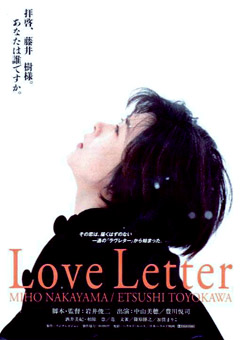 I think it’s been a long time coming. I’ve had this review sitting for over a year, and since I was in the mood for some loving, what better way than to watch this all over again?

Love Letter is Shunji Iwai’s first feature length film, and it’s a quintessential romance — scratch that, Love Letter is a classic of the genre. Plagued with beautiful cinematography of the snowy city of Otaru through the eyes of Noboru Shinoda — I told you they made magic together! [1] — as well as a mood-setting score by REMEDIOS, the film starts out simple enough when we meet Hiroko Watanabe (Nakayama) celebrating the second anniversary of her boyfriend Itsuki Fujii’s death alongside his family and other friends.

Hiroko hasn’t been able to move on since the passing of Itsuki, who lost his life in a climbing accident. Even worse, Itsuki’s best pal Akiba (Toyokawa) has stopped climbing altogether and is unable to attend his death anniversary. When Hiroko gets the chance to reconnect with Itsuki’s mother, she shows her his junior high school yearbook, the one from when they used to live in Otaru. In a whim, Hiroko finds herself writing down Itsuki’s old Otaru address, and sending a short simple letter saying, “how are you? / お元気ですか？- o-genki desuka?” without ever expecting it to reach Heaven.

Hiroko certainly didn’t expect to get a response. However, when she gets a reply from someone in Otaru also called Itsuki Fujii (also played by Nakayama), both their memories of the Itsuki Fujii they knew are turned almost upside down.

Okay, I have to admit. The first time I watched Love Letter, I was VERY confused. One actress playing a dual role, and two characters named the same. When I finally fixed my brain, I think it was well into half of the film. I just couldn’t understand how a man and a woman could have the same name, but I guess… it could happen?

Love Letter is filled with love, hurt, regret, memories, happiness, and even moments of the pure silliness of young love. It really makes you think about the things you didn’t do, the things you wanted to do, and the things you did experience. I’m just rather surprised Miho Nakayama didn’t hit it big after the release of this movie, but we all know what Shunji Iwai ended up doing… little something somethings titled Swallowtail Butterfly, All About Lily Chou Chou, and Hana & Alice.