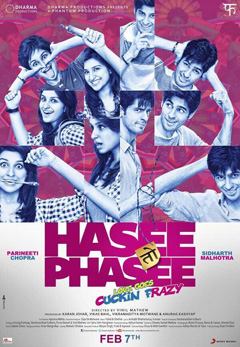 I’m a Parineeti Chopra instant convert, seeing her stealing scenes left and right on Ladies vs. Ricky Bahl (Rani Mukerji qualities, anyone?) sent me on my way to religious Romeo-and-Juliesque Ishaqzaade, and Shuddh Desi Romance where Chopra is actually the highlight on a slow -though quite defying- romantic dramedy. My interest in Hasee Toh Phasee sparked after catching a random clip of Parineeti speaking Mandarin, and I just knew I HAD to watch it.

The film follows Meeta (played by Chopra in her grown up years), an ingenious girl who probably gets into trouble often due to her thirst for knowledge often backed by her father (Manoj Joshi), and Nikhil (Malhotra as a grown up), a mischievous boy who often defies his very strict cop of a father (Sharat Saxena). Destiny puts this unlikely duo when Nikhil catches Meeta — now an attention-deficit short-haired girl — escaping a crowded wedding where he meets his would-be fiancee, Karishma (Adah Sharma).

On the week of his wedding, Karishma introduces Nikhil to the black sheep of the family: Meeta, now the long-haired pill-popping girl he once met.

I gotta tell you, I loved Meeta even with some of the inconsistencies of her character. There’s a big change in personality and quirks from when Meeta is a child and once she’s played by Chopra, but her awkwardness and some of the things she’s accused of (her relative suggesting she’s more likely to bring home a daughter-in-law instead of a son-in-law was particularly strong) makes you root for her, and Parineeti is up to the eccentric and emotional challenges. I really enjoyed the development of the relationship with her father, which I argue is the center of the film instead of the romantic aspect that the movie tried to spin.

What’s up with men getting main credits ahead of their more known leading ladies? It happened with Ranveer Singh and Deepika Padukone on Ram-Leela, and it happened here. Nothing against Sidharth Malhotra, who played Nikhil to the best of his abilities, but this is his second film… and to top it all; I didn’t think his conflicts were as interesting. His bossy money-crazed girl, who is the complete opposite of her sister, was poorly developed and only highlighted the victim aspect of his own decision-making. I would rather the movie ended NOT with having to have a couple, but after the fiasco that was Shuddh Desi Romance, I’d understand them wanting to stick with the safe bet. And for your information, I thought the ending in SDR was surprisingly refreshing, even if the road was boring.

Overall, I enjoyed Hasee Toh Phasee quite a bit; it’s kind of a fresh take on what people expect from Bollywood trying to sneak in or just entirely avoid complicated choreographed numbers, which- let’s face it, we’re not rooting for Parineeti for her dancing skills, and in my short months, I’ve given up trying to find the next Madhuri Dixit.

I know a lot of people didn’t like Gippi, but I think Karan Johar and Dharma are headed into good territory. I hope sound people follow and not turn away from some of his female-centric films. Someone needs to pick that up from Japan!