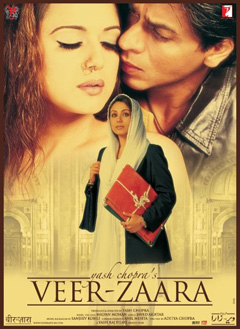 Have you ever been in love? So in love that you’re willing to give up your life not being with the person you love, only for the peace of mind that by doing so, they’ll have a decent life. Only for the sake of honoring their family’s wish and save face, for the mere reason that it’s THEIR family.

We have it easy… culturally, financially — I don’t have to be held accountable for my family’s future, I’m not betrothed to anyone nor I’m in love with anyone in that situation, because culturally that’s not how we roll. That’s the beauty of Veer-Zaara as an epic romance to last a lifetime.

Meet Prisoner 786 (Khan), a nameless Indian man who has been in Pakistan’s prison for 22 years without uttering a word to no one, until the day he meets lawyer Saamiya Siddiqui (Mukerji). Recently appointed by the Human Rights Commission, Saamiya takes the case and addresses Prisoner 786 as Veer Pratap Singh, ex-Squadron Leader of the Indian Air Force.

At this point in time, we get into the story within a story territory [1][2] as Veer tells us the story of Zaara Haayat Khan (Zinta), the spirited and carefree Pakistani girl he fell in love with when she was travelling to India to return her old governess’ ashes to the holy Sikh city of Kiratpur. Joining Zaara in her journey, the two bond, create memories together until they, well… fall in love with each other. The problem? Zaara’s already betrothed to Raza Sharazi (Manoj Bajpai), the son of a political party leader whom along Zaara’s father, Jahangir Hayaat Khan (Irani) — another political figure — wish to strengthen their images with the union.

From that point on Veer-Zaara is a bit of an always-told story of an unlikely outcome… a romance that can only happen in movies (most of the times, anyway), however, that doesn’t diminish the power of the bond that comes from the love Veer and Zaara feel for each other. It gets a little too self-explanatory with the dialog and montages explaining the feelings and emotions in the key scene, but that doesn’t diminish the power of the main song from the Veer-Zaara soundtrack, simply titled Tere Liye [1][w/ subtitles].

Besides being an epic romance, Veer-Zaara also gives us some pretty rocking ladies in Zaara herself, the girl who was unlikely brought up as a boy… raised to be strong, quite opinionated and independent, as well as Saamiya who grows to be the first female Pakistani lawyer, following in her father’s footsteps. Both take a stand and break the mold of more traditional characters, and both Zinta and Mukerji do a great job. However, it’s Khan who surprised me, but that’s because from the few movies that I’ve seen, he seemed like a one-note charismatic star, but he can actually emote despite some of that lesser old-makeup that he had going.

Extra quarter of star for the actual suffering romance.