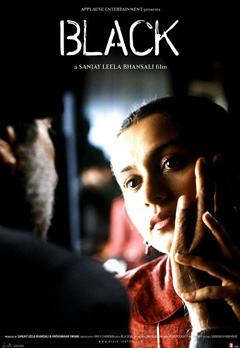 People on the internet have no idea what the meaning of “shot by shot” remake really is — eg. Let Me In [1] or the unspoken agreement that Fincher’s Dragon Tattoo [1][2][3] wasn’t one either. So I was somewhat shocked that after enjoying the visual aspect of Sanjay Leela Bhansali’s Black, I saw people complaining that it was a “shot by shot” copy of The Miracle Worker, which is in turn one of the many versions of the adaptation of Helen Keller’s life — who is, in fact, name-checked at the beginning and by the end of the film.

Black is Bhansali’s Indian re-imagining of the Helen Keller story — in here, we follow Michelle McNally (Mukerji) as she narrates the story of her life as a deaf and blind girl (Kapoor) and the relationship with her teacher, Debraj Sahai (Bachchan). Unlike the other adaptations of Keller’s story, Black follows through Michelle’s understanding of the meaning of words and moves onto her life and struggles in university, and as a grown woman. It’s all a very depressing story with an incredibly optimistic outcome, with a dash of more melodrama because it IS an Indian film, as Michelle finds herself in reversed roles with her Alzheimer-ridden mentor to teach him what he taught her.

Amitabh Bachchan and Rani Mukerji are, of course, pitch-perfect in their roles, hitting each and everyone of their emotional cues like they were born to play the roles. However, it was newcomer Ayesha Kapoor who stole much of the spotlight from these two playing the unruly version of Michelle, and hitting her biggest blow in the scene where she finally understands the meaning of what “water” is. The part is obvious Oscar-bait in terms of physical requirements, so it was Mukerji’s strength as an actress to show us the conflicts of Michelle’s life post-childhood could be as compelling.

The strongest element in the film, however, has to be Sanjay Leela Bhansali’s directing. It’s not often that while watching a movie you’ll make a mental note of the director, not because of the strength of the story he’s telling, but because the visual aspect is powerful enough to grab you more than the human element. It was a specific shot where the light came through against all the surrounding darkness in the frame taking over for just a short while, something that Bhansali has also used in films like Khamoshi: The Musical and Hum Dil De Chuke Sanam, so I’m expecting to see similar playful shots in the rest of his work. It’s gorgeous. And no, it’s not because cinematographer Ravi K. Chandran was involved, because no such similarities can be seen in films like Fanaa or My Name is Khan.

Black is also very… “un-Bollywood” as it is primarily scored with instrumental pieces by Monty Sharma, and contains only one song performed by Gayatri Iyer titled Haan Maine Chukar Dekha Hain [1], which translates roughly to “I have touched and seen” and is a wonderful delicate mix of the senses [1] and very overwhelming feelings. However, as consequence, the movie feels extremely short, but is perfect in its focus.

Now, imagine if sign language were standard. It’d be more awesome than Esperanto.