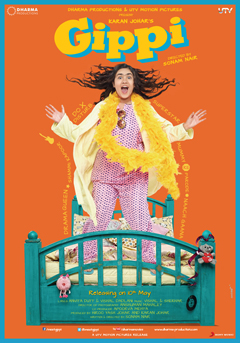 She’s a little chubby, she’s awkward, she’s shy and her favorite pastime is dancing to old Shammi Kapoor numbers. Who is she? She’s Gippi (Vij) And she’s a pretty typical kid. But what sets her apart from her contemporaries is what she does in the face of adversity. She pouts for a little bit, but then picks herself back up and conquers her enemies and her fears.

Gippi; full name: Gulpreet Kaur, lives with her single mom (Dutta) and little brother BooBoo (Kadwani) They make a happy threesome at home, but Gippi is struggling with her popularity at school and the complications of living a multiple home life when she meets Arjun (Shah), the older boy girls dream of, and best of all, he’s interested in Gippi – or is he? At a party, he reveals (much to Gippi’s humiliation) that he’s not at all interested in her romantically. If that’s not devastating enough, her arch-nemesis insults her and then challenges her to a battle of popularity in the Head Girl elections at school. With the help of her family and friends, Gippi meets the challenge head on and faces not only her issues at school, but her issues at home with a whole new attitude.

What I loved about Gippi is that it’s actually an Indian film about kids, for kids. Not a film that features a whole gaggle of loveable kids, but they’re there mostly for filler and for the adults seeing the film to feel good about the silly romantic storyline. I also loved that Gippi is a great role model for girls her age. It’s a story that anyone can relate to, whether they just had their 14th birthday party – or their 40th.

Gippi also tackles the idea of a split home. This is something that’s new for me in an Indian film, and I’ve seen a LOT. Sure, I’ve seen couples leave one another or die a horrific death. But very rarely have I ever seen divorce brought up. Let alone have it show what it does to the kids. I think the only other film I’ve seen that touches the subject might be Konchem Ishtam Konchem Kashtam. I’m glad to see a modern family structure represented because it can help show kids that a family can still function after divorce, and it’s not the end of the world.

As a rookie actress, Riya Vij was stunning. She fell into the role of Gippi as if it was written for her. She was delightful as she danced about and was silly, but she was believable when she needed to be vulnerable and serious. Not a lot of real life fourteen year olds can manage to act with dignity and grace like Riya did. I hope she decides to return to the screen again after this, because I can’t wait to see who she’ll grown into. I might even see a future Juhi Chawla in the making. They have a similar innocence and delight to their character. But, hopefully next time she won’t be cast alongside someone ten years her senior as a love interest- I’m looking at you, Taaha Shah.

While Gippi might be a fluff film,  it shows some real substance amid all that fun and laughter. The main character is lovable, but tough and has a great personality that everyone will love. If you’re looking for something fun and uplifting to watch, throw in Gippi – you won’t be disappointed.