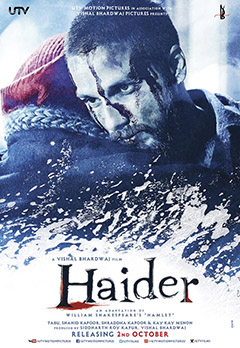 This July, I will be commemorating my 2nd year following Indian Cinema [1][2], but I had literally spent a whole year waiting to watch Vishal Bhardwaj’s latest adaptation of Shakespeare. I stalked news online, re-read Spanish-translated Macbeth and Hamlet, basked when the first trailer was released [1], when Bismil [clip] was out- I even rewatched Maqbool. October was torture, news headlines spoiled the ending… but (finally) Haider still managed to leave me quite breathless.

For those unfamiliar with Hamlet, Haider showcases actor Shahid Kapoor as the title character as he sets out to seek revenge for the death of his father (Jha) against his uncle (Menon) and mother (Tabu), whom he believes had plotted against him.

I often say it, but I’ve always enjoyed more seeing Shakespeare performed than actually reading it. This time around, I was glad Bhardwaj had decided to spend a whole hour (the film is nearly 2.40hrs long) to explain what the political situation was in Kashmir in the 90s for audiences that wouldn’t necessarily know anything about it. While the Bismil number does summarize the family conflict in a 6min. marvelous song/choreography with a sick beat, we take that hour of setup to create bonds as viewers to actually care not only for Haider as he struggles with the blurry line of trust and betrayal, but also to connect to his mother, Ghazala, who basically becomes the anchor of the whole story. Either that or everyone is madly in love with Tabu.

While the film had been accused of being one-sided and I could see why that might be, I think it manages to escape being considered propagandist. Vishal’s version of Gertrude is so fleshed out as a character that it leaves the page and becomes its own- Tabu’s own, Ghazala. She’s crazy manipulative, of course, but you could see all she wanted was something better for her son. Politics aside, anyone certainly could emphasize with that, no?

My only grip with Haider, and most modern-day or contemporary adaptations, is that characters usually feel like checklists. Performances were great altogether — Kay Kay Menon and Narendra Jha in particular — but just as Vishal did with building up Ghazala, I would have liked to see a better fleshed Haider, though Kapoor’s square monologue was chilling, I just… didn’t feel like I understood him. For him to doubt his mother, despite the strong bond that he shared with her, they needed to show me more of the bond with his father- reciting the verses of a song or polishing his shoes wasn’t enough. The film is already long, but it’s so well-paced that I wouldn’t have minded 20 extra minutes to make it a full 3hr. movie.

Despite its flaws, Haider is an experience that you want to repeat over and over again- its gorgeous cinematography showcasing the freezing whites and cold hues and Vishal’s music [So Jao clip] enhance a very strong ensemble that will stay within you.

One thing I could’ve done less with- Salman. LOL

You can listen to the whole soundtrack on Times Music, or get it on iTunes.

Haider is available for streaming on EROSNOW with subtitles in English and Arabic.