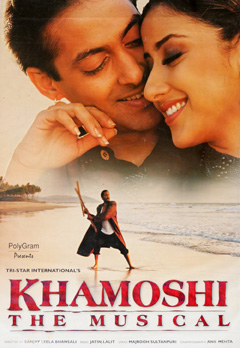 I have a confession to make- I may have a hate-meh relationship with Salman Khan. I didn’t mind him in Kuch Kuch Hota Hai; however, my reaction to him in this movie and in the subsequent Hum Dil De Chuke Sanam might be an indication that I may not be destined to look his filmography up. But such has been my love at first sight with Sanjay Leela Bhansali’s eye.

Admittedly, I got to catch Khamoshi: The Musical after watching Black and Hum Dil De Chuke Sanam, which made the connection among Bhansali’s filmography a lot more evident. In here, we follow the story– a musical in the tradition of Indian films — that has to do with a family of deaf mutes in an India that hovers in time. It feels like it’s set in the 90s as much as it is set after India became independent. I know I haven’t watched many films in my viewing history, let alone films about characters with disabilities. As far as sign language goes, my knowledge goes as far as any project related to Marlee Matlin, and this blows anything she’s ever done out of the park- yes, including her role in Children of a Lesser God.

Nana Patekar plays Joseph, a deaf mute man who marries Flavy (Biswas, who starred in the critically acclaimed Water), a deaf mute woman. They have a baby together, a hearing baby whom they believe is a God-sent child who grows up with the hurdles of having hearing and speech disabled parents during those times, with the little resources they had and against all odds. As she grows up into the sensible Annie (Koirala), she’s caught in between the worlds of the hearing and non-hearing as she balances the love for her parents, her love for music and her love for life.

It’s all very dramatic and beautiful — and how wonderful is it that the film is called “silence” the musical? Though the main issues dealt in the film are about being a deaf mute person, the obstacles that these characters go through go beyond the “Oh, I got to overcome this communication obstacle.” It isn’t about these issues because Annie’s grown up in this world of silence with her parents, she knows how to sign — or Koirala seems to do it fluently on par with Patekar and Biswas. There’s plenty of communication going on that is met with hardheadedness and pride, and the struggle of a family that’s been torn bit by bit throughout their lives.

Manisha Koirala sure does shine as the spirited Annie — she also plays the spirited heroine in 1942: A Love Story, which was co-written by Bhansali as well — but it’s Patekar and Biswas who anchor her performance and give it the boost that’s needed to propel her out of the simple coming-of-age romance territory. I’m telling you, I’ve got no love for Salman Khan and his presence has reached creepy levels in Saawariya.

I think it might have been outstanding to see the evolution that Bhansali has shown in his career, just looking back at it you can easily notice that the dramatic elements used in Khamoshi: The Musical combined with the technical mastery that he acquired throughout the decade with Hum Dil De Chuke Sanam resulted in the visual wonder that is Devdas… or most evidently in Black. Most of the time, it’s difficult to pin-point the exact elements, but in Bhansali’s case, his growth is noticeable.

If you ever EVER need to watch a Sanjay Leela Bhansali picture, high definition is a must. Only his latest films have Bluray releases, so I’m crossing my fingers and hoping with all my soul that all of his films are released soon.