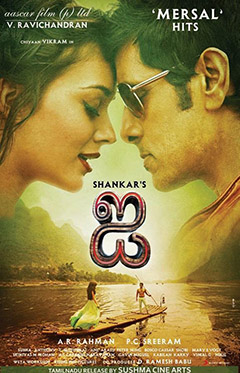 I’m going to be honest with you, my interest in I sparked because the eye candy on the trailers [1][2] was just too much for me to ignore, and Endhiran was on my radar because as a Peruvian I couldn’t ignore Aishwarya and Kilimanjaro [clip] now, could I? I’ve learned to approach the commercial aspect of Indian cinema with a grain of salt and Shankar’s filmography isn’t the exception. You have no idea how much I rolled my eyes during Endhiran… that is until the giant robot snake showed up.

I (or better yet, Ai) can refer to “beauty” in Tamil, and thus Shankar’s The Hunchback of Notre-Dame splashed with The Beauty and the Beast inspired revenge tale begins following the life of bodybuilder Lingesan (Vikram), who dreams of becoming Mr. Tamil Nadu to reach the title of Mr. India. Shaped after old school bodybuilding Schwarzenegger, Lingesan fanboys supermodel Diya (Jackson) for whom he buys even female undergarments and sanitary pads that she sponsors, collecting every single magazine spread or ad.

When Diya is forced to checkmate her modeling partner John (Patel) who is trying to sleep with her, she gets her agent to launch Lingesan’s modeling career to great success, drawing the ire of people surrounding them one by one.

While the film drew the anger of some people who felt Diya’s first-class magical stylist Osma Jasmine (real life first-class magical stylist Ojas Rajani) was negative representation of the transgender community [1], stinking of the psychotic LGBT character of not-so-yesteryear Hollywood, I’d argue that there were so many other bad characters to instigate Lingesan’s revenge. It just sucks that her character’s motivations was love rejection. However, the thing that disappointed me the most was that all the eye candy I was looking forward to was in the shape of commercial-shooting in the story. The biggest culprit- Pookkalae Sattru Oyivedungal [clip], and then there’s Aila Aila [clip], which I could swear it references Kamal Haasan’s Thevar Magan when promoting the eyebrow-raising Fair & Lovely skin-lightener- which brings me to Amy Jackson~

Asia and its obsession with pearly white skin.

Kalki Koechlin will be the first to tell us not to expect Indian women (or of any other nationality) to look a certain way- not because Jackson is a White woman would she be less Indian. But she’s an English model, and she doesn’t particularly strike me as dominating Tamil as a language or kicking butt in the acting department either. She may have fitted the role to a tee in her debuting Madrasapattinam, where she played an English woman who fell in love in/with Tamil Nadu, but over-looking all of this- she does an able job here. Much better in the second half than the first, which drags a good hour to build the romance. The second half breezes through with the actual plot and the revenge side of things, letting Vikram shine. It’s almost a pity he had all this near-method dedication to his role by losing weight (nearing 40kg.) and gaining it (up to 120kg.) for a 5min. sequence for Ennodu Nee Irundhaal [clip].

Overall, if you can sit through until the intermission without groaning you’ll be rewarded with some really good action sequences — despite some silly Wing Chun punches from Upen Patel, you gotta be a martial artist to pull those off — and some really great make-up.

It also makes more sense than the lesson in Beauty and the Beast, it’s not like the Beast learned to love the Beauty despite her fading looks– in the Disney version, I mean.