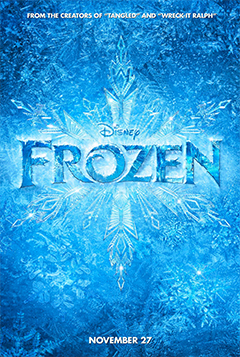 It’s amusing that, in a film so populated by ice cold hearts and landscapes, one would find such warmth and beauty. Frozen, in so many ways, is a Broadway musical in the body of an animated film. It’s sweeping, emotionally charged, and ultimately, all about the music.

Entirely unlike the story it’s meant to be based on, Frozen is the tale of two sisters, Elsa (Menzel) and Anna (Bell). Elsa was born with the gift of bringing forth winter, a gift she regards as a curse, after injuring her sister in their youth and being forced to remain away from her throughout the years. When it comes her time to take the throne in her father’s place, Elsa finds that trying to hide her powers from the world is much harder than just concealing her frozen touch with gloves.

To reveal more of the film would be a grave disservice to it, and in some ways, it’s something to be grateful for in Disney’s lacking advertising. By choosing to focus on the minor inclusion of physical comedy, the reality of Frozen remains hidden under the snow for those who watch to experience. Within, you find a tale of sisterhood, of love beyond that of simple romance, and of embracing every gift you’ve been given, even if it seems like you’re trapped because of them.

In that way, the film that Jennifer Lee and Chris Buck present us is pure Disney. This isn’t to say that most of their animated films haven’t been just as rooted in the vein of overcoming adversity and learning to love your flaws, because most of them do. A couple of twists thrown in might surprise some and leave others pondering why they’d take such a predictable route, but the journey itself is delightful, almost from start to finish. Even with the lush 3D animation – leaps and bounds ahead of Tangled in the way the scenery unfolds right before your eyes – there’s something about this little film that makes it feel rather traditional. That, my friends, is the music.

As much as Alan Menken’s music has become a staple of Disney musicals, there’s something all too refreshing about a new group of songwriters and composers. Robert Lopez and Kristen Anderson-Lopez may not be names many are familiar with, but they claim the fame of being the couple behind Disney’s very own Winnie the Pooh, and Finding Nemo – The Musical (with Robert being the man who delivered Avenue Q & The Book of Mormon to Broadway). These are two songwriters who know exactly how to make a musical deserving of an actual stage adaptation.

The songs come in all forms; grandiose and uplifting (Let It Go!), bittersweet (Do You Want to Build a Snowman?), downright amusing (In Summer), and plain cheesy fun (Love is an Open Door). There are more, of course, and the time between the songs is filled with Christophe Beck’s impressive instrumental work. If anything can be said to complain about the music, it’s that there wasn’t more. You’re left with an almost cold longing as Frozen reaches its climax, waiting for a touching song that encapsulates every feeling that’s past.

But that can be forgiven, as the delightful cast of voices will go on ringing in your head for days after you’ve first heard them. Bell, Fontana, Gad, Groff, and Menzel are all experienced in the realm of musical theater and it shows in the way their voices are presented. Not a voice seems out of place against the characters and the sounds become one with their personalities. As much as the film chooses to focus on Anna over Elsa, it is the Snow Queen that leaves the biggest impression. Something as simple as Menzel snapping, “The cold never bothered me anyway,” after singing about finally experiencing life at its most free is hard to forget.

By no means is the claim that Frozen is Disney’s best musical since Beauty and the Beast a realistic one, nor is it a fair one. Is it memorable? Yes. Is it original? Even with it’s roots deep in Disney tradition, yes. Is it some of the best music Disney has made since the nineties? Definitely. But there are certainly some cracks in this ice sculpture, and only time will show if the warm reception for this film will cool off or grow.

Note: Preceding the film is a must-watch short film by Lauren MacMullan. Get A Horse! is a delightful blend of classic Disney animation (B&W and color) and CGI . It’s really just Mickey Mouse at his best in this day and age. Additionally, stay past the credits if you’d like for one last little scene for the feature.