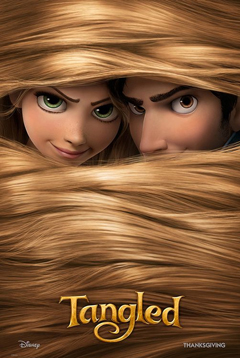 After the success — or not-success — of The Princess and the Frog, Disney decided to give the old fairy tale of Rapunzel a spin, called it Tangled and amped the male character. Call it a creative spin, or a marketing spin, it proved to work for Disney.

Tangled begins with the voice-over monologue of bandit Flynn (Levi), who tells us the movie is the story about how he dies. The story begins way back when the Queen was so ill that the only thing that could cure her was a magical flower, which was, at the time, in possession of Mother Gothel (Murphy) to keep herself from growing old.

The King’s men managed to find the flower and save the Queen, who eventually gave birth to a healthy, magical and very cute golden-locked baby, whom she named Rapunzel (later voiced by Moore). Mother Gothel tried stealing a lock of golden hair to discover it doesn’t work, so she kidnaps the baby, locks her in the tower… until the day she’s about to turn 18.

Well, that was pretty much the whole fairy tale aspect of Tangled, and it’s all in the introduction! My main problem with the film is that it doesn’t really feel like a princess film… Disney’s desperate attempt to market this to “boys” made it lose that aspect. Tangled has no magic, and by trying to make it more “modern” — admittedly  fell for Pink’s Trouble on the trailer — it sounded too much like Saturday morning cartoon dialogue.

It had its moments of gorgeous possible memorable scenes, like the one when Rapunzel visits the kingdom. But like most Disney princess films, it’s more about the bad guys than the princesses sometimes, and Rapunzel’s relationship to Mother Gothel is one of the most interesting bits in the film. Messed up, and somewhat needing of a psychologist… but interesting.

Flynn, however, is quite forgettable… like most of the musical numbers, except for Mother Knows Best maybe.

If Disney really wanted to make a modern Disney princess film, they fared much better with Enchanted — it even has better songs!