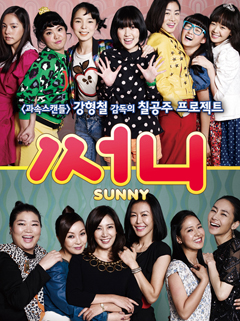 After much notice from people online, including our very own Julyssa [1][2], I got the chance to catch Sunny and see what one of Korea’s biggest hits of the year — up until now — was about. I was not disappointed. In fact, I was very impressed by how much I enjoyed watching this.

Sunny begins following Na-mi (Yoo), already married to a successful man who only seems to pay attention to her by treating her with gifts and cash. Na-mi’s teen daughter doesn’t have a close relationship with her, instead preferring her dad’s way of caring. On the day that Na-mi is visiting her mother at the hospital, bringing a nice Chanel bag with her as a present, Na-mi encounters an old friend from high school. Chun-hwa (Jin) is at the hospital receiving treatment for cancer and asks Na-mi to get the gang together.

And this is what’s ingenious about the film. As you can see from the poster, it’s just really freaking good casting. Sunny transports us to 80s Korea — fashion, music and all — There we meet newly-transferred teen Na-mi (Shim), who immediately gets picked on by some girls. If it weren’t for obsessed with double-eyelids, Jang-Mi (M.Y Kim as a teen, Ko as an adult) and alpha leader teen, Chun-hwa (Kang), the awkward Na-mi would be done for.

Na-mi clicks with the whole gang right away , including dirty-mouthed Jin-hee (Park as a teen, Hong as an adult), violent with a stick, Geum-ok (Nam as a teen, Lee as an adult), future Miss Korea, Bok-hee (B.M Kim as a teen, S.K Kim as an adult) and… maybe not so well with oh-so-pretty Su-Ji (Min). Sunny masterfully transitions from present day Korea to the girls’ 80s memories without resulting in cheap flashbacks, which there should have been a lot of considering half of the build up occurs on a different timeline.

The film makes great use of comedy in between the nostalgia of the era — anyone who’s ever sung to Cyndi Lauper’s Girls Just Wanna Have Fun understands — and some very dramatic moments always prevalent in Korean dramas or television, which writer/director Hyeong-Cheol Kang is aware of and addresses in a very funny scene at the hospital.

The acting is on point from all the actresses, especially from leads Ho-jeong Yoo and Eun-kyung Shim, who play Na-mi at different stages of her life, without an in-between. While teen Na-mi was awkward and needed someone to stick out for her, grown-up Na-mi had become poised and became the glue the gang needed her to be. Another highlight was dirty-mouthed Jin-hee. Kudos go to Jin-joo Park for the challenges of such a dirty mouth, which she delivered with such ease — even funnier in contrast to grown-up Jin-hee.

Though the basic premise of Sunny is the nostalgia of women who have lost their identities on their way to becoming adults and builds up its success in the feel-good female friendships, I really thought the happy ending was too much of a happy ending, even as tinged as it was with bitterness. The inclusion of the lawyer, though funny, was a little too Deus-Ex-Machina, fixing everything that needed to be fixed to make the audience leave with a silly grin on their faces.

We would have left the film with a silly grin even without the tying of these loose ends.