The Fangirly Diary of a Geek Girl: Wonder women of the new world!

Greetings, my fellow geeks! This week has been very slow in news and I blame all the holiday laziness on that one. Still, we still have things to report, including wonder women new and old talking about the role~ Also, The Hobbit: The Desolation of Smaug keeps slaying at the box office and I am glad I went and saw it again. Here’s what happened this week:

So, apparently, some dude or dudette paid £4,500 for Tom Hiddleston’s blue size 11 Converse trainers. It was for a good cause though!

The Small Steps Project in Archway put 120 pairs of the celebrities’ shoes under the hammer last week to give the public the chance to walk like their favourite stars, while raising funds to support families who live on rubbish dumps in developing countries.

On sorta related news, four of my fav British actors are kicking ass in the London Theathre scene! Wish I could see Hiddles as Coriolanus, Jude Law as Henry V and David Tennant as Richard II, and on not-Shakespeare stuff, there’s also Matt Smith as Patrick Bateman in American Psycho, the musical~

Marvel continues confirming stuff we knew ages ago. Yep, Vin Diesel amazed everyone saying “I am Groot” in so many different ways for Guardians of the Galaxy, or so director James Gunn said:

Yep it is completely official. AND he’s amazing. I never knew someone could say I AM GROOT so many different ways and with such feeling (and that sounds like I’m kidding but I’m not!) 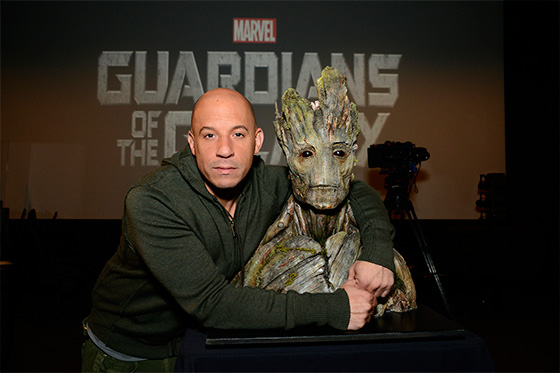 Poor Anna Paquin’s scenes were deleted from X-Men: Days of Future Past. Damn, that’s cold, Bryan Singer! She was even in the trailer!

Through the editing process, the sequence became extraneous. It’s a really good sequence and it will probably end up on the DVD so people can see it. But like many things in the editing process, it was an embarrassment of riches and it was just one of the things that had to go. Unfortunately, it was the one and only sequence Anna Paquin was in, the Rogue character was in. Even though she’s in the materials and part of the process of making the film, she won’t appear in it.

But some have faith that maybe she could be reincorporated in the movie during pick-ups!

Oh yeah, here’s host Ellen DeGeneres dancing down a street for the Oscars~

The Hobbit: The Desolation of Smaug remains number 1 at the box office in the USA. And has also passed $400 million worldwide, Frozen is also doing mighty fine with $344 million all over the world, Thor: The Dark World and Gravity got way over $600 million, and The Hunger Games: Catching Fire is also over $700 million… and that’s all the movies I care about for now~

We want more Pacific Rim, that’s a fact. But what we get might be a prequel. Or that’s what Max Martini (hot dad and Jaeger pilot Herc Hansen) hinted~ So, can I get a Latin American Jaeger… or more about that Russian pilot pair?

Working with Guillermo (del Toro) was a highlight, and the green-screen work was new to me….It’s funny, I fell in love with this character (Herc Hansen). The key component was this relationship I had with my son, exploring the dysfunction and the loss, so where does Herc go from here? I don’t know. It’ll be interesting to see where Guillermo (del Toro) and Travis Beacham take it. I don’t know if it’s a prequel or a sequel, but if it’s a prequel you’ll learn more about Herc’s family history. But Guillermo has such a vivid imagination, it could go anywhere

Here’s a preview of The PowerPuff Girls special event for their anniversary. Yep, the animation is way different. Not sure if like. But hey, at least it’s better than the anime version!