The Fangirly Diary of a Geek Girl: Harry Potter and the family portraits~

Greetings, fellow fangirls and fanboys! This week we got our first official looks of the Harry Potter and the Cursed Child cast! Also, more comicbook news, casting news and reshoots! Here’s how the week started:

Disney California Adventure Park premiered Frozen – Live at the Hyperion, a stage show adapted from Frozen, obviously. It’s a different thing from the Broadway production that will debut in 2018. Still, it looks cute enough and doesn’t overstay its welcome with an hour length! Check out these images (and things to know), and some highlights in video:

In Box Office news, as of now, Captain America: Civil War is the highest grossing movie of 2016 in US of A. Sorry, Deadpool. Also, damn, Batman V Superman: Dawn of Justice, I’ve just realized it couldn’t beat Deadpool at domestic box office?!

In Box Office new, Zootopia is now the second biggest original movie ever! That is, it is not based on a television show, a comic book, a novel, or a stage play; not a sequel, prequel, or reboot from an existing franchise; not based on an actual historical event. Entirely original! First place is, of course, Avatar. Even if some people say is Pocahontas in space~

In other Box Office news, X-Men: Apocalypse crushed Alice Through the Looking Glass on Memorial Day Weekend, over $80 million to $34.2 million! I mean, what was Disney thinking! I know Alice in Wonderland made bank, but that was 6 years ago. This movie is 3 years too late. Comicbook movies are the thing know, you know this Disney, you own freaking Marvel!

Reshoots are a common things in blockbuster. In fact, most studios plan for them, both in time and budget. But according to rumors, the reshoots Rogue One: A Star Wars Story will be headed for are many and expensive. And that’s not good! According to the sources:

The execs at Disney are not happy with the movie, and Rogue One will have to go back into four weeks of expensive reshoots in July.

The rumours are true! Dwayne “The Rock” Johnson IS Doc Savage! Earlier in the month Dwayne Johnson teased he might make a “cool movie” with Shane Black. That would mean either the new Predator film or Doc Savage. But most thought the latter. And they were right! Anyway, it’s been confirmed by “The Rock” himself on a lengthy post on Instagram. He seems quite enthusiastic of it.

Comic book fans around the world know that the cool thing about “Doc” Savage is that he’s the inspiration for Superman. First name Clark, called “Man of Bronze”, retreats to his “Fortress of Solitude” in the Arctic etc etc. […] But here’s the #1 reason I’m excited to become Doc Savage. HE’S A F*CKING HILARIOUS WEIRDO! Confidently, yet innocently he has zero social graces whatsoever due to his upbringing so every interaction he has with someone is direct, odd, often uncomfortable and amazingly hilarious. 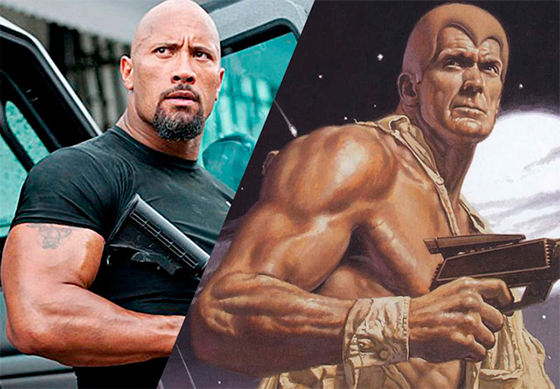