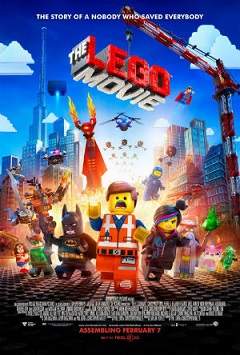 When the teaser trailer for The LEGO Movie [1] was posted, I asked Amy “why not releasing it on November to contend with the other animated nominees?” and she answered “coz they all know it’s a cheesy blunt money-grab not an award contender xD most American films lumped in the mid-January-March are usually crap to lukewarm.” and I understand her point considering the more important (and better) films get released later on despite me thinking that the Lego franchise has a similar mass appeal just like Despicable Me 2 or Monsters University… not to mention that the company wouldn’t want a lousy debut for its first feature film. However, almost everything is awesome in The LEGO Movie and had it been released during the 2013 awards season, it would have been a serious rival to Frozen.

The film follows Emmet Brickowski (Pratt), an ordinary, rules-following construction worker who lives his life in routinary fashion. One day at work during after-hours period, he notices an intruder and investigates what’s going on. This leads to Emmet being labeled as the “Special” and a “Master Builder”, learning what Lord Business (Ferrell) is really about and the quest to save the world is headlined by Emmet of all people, who happened to stumble upon the “Piece of Resistance” that is capable of stopping the “Kragle”.

The team of Phil Lord and Chris Miller are three for three in film directing as far as it concerns my film viewing. They yield “better than expected” films out of material that seems either not promising or cheesy and they made Cloudy with a Chance of Meatballs and 21 Jump Street fare suprisingly well as well as being entertaining to watch. The LEGO Movie is their best effort at the moment and it’s not only due to how awesome it is to see a entire world made out of Legos, but the main storyline along with the funny jokes/gags and the likeable characters makes up for a smooth viewing.

As you would expect from a film of this kind, it was a given to see advertisement spotfest through characters from established franchises — the most often appearence is done by Batman (Arnett) who is Wyldstyle’s (Banks) boyfriend — but it’s great that none of them overshadows Emmet’s development and his new allies, which includes the wizard Vitruvius (Freeman) and the ass-kicking Wyldstyle.

I know most people are quoting Everything is Awesome (the film’s signature song by Tegan and Sara feat. The Lonely Island) [MV] to describe The LEGO Movie and it’s understandable. But what makes the film memorable happens near the end when it takes an unexpected direction and it manages to give a strong payoff to balancing “use of creativity” versus “following the rules in life” that is seen during the entire film and ties everything that happens in The LEGO Movie. It’s something wonderful to watch in terms of what’s it like to play with Lego (or toys in general) and it’s a standout moment for this year in film viewing.

By the time I finished watching The LEGO Movie, I really wished I could have seen it in its original language. Some jokes and sarcastic bits are lost in voice dubbing as well as being deprived of not hearing the original voice actors. However, the viewing experience of Phil Lord and Chris Miller’s Lego-made world is really solid thanks to how everything plays out.