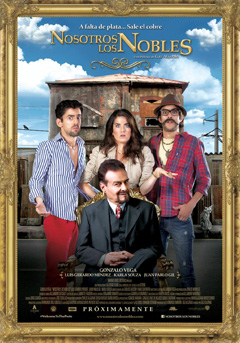 Despite the good 2013 that Universal has had [1], it’s been quite a succesful year for foreign commercial films in their home turf [1][2][3][4]. Following on the steps of No Se Aceptan Devoluciones, Mexico produced Nosotros Los Nobles — both of them sitting in the Top10 of this year’s Mexico’s box office until now [1]. Yay! Victory lap!

Director Alazraki in his feature length debut takes note from Buñuel’s El Gran Calavera to tell the story of Los Nobles, a high society Mexican family of three spoiled young adults — Barbara (Souza), Javi (Mendez), and Cha (Gil) — and their father’s (Vega) machinations to pretend their company have gone bust and are on the run just to set them straight.

Grab the most incredibly eye-roll worthy characters; the main heir for Los Nobles’ family enterprise, Javi, who believes the next big thing will be VIP Gas Stations if only he could strike a deal with oil company Pemex while vacationing in their private jet to Miami; the young Cha who is too busy living the life smoking weed and having sex with his too-old-for-him teachers to pass courses; and the preppy Barbara who’s about to get married to one of the most conniving con artists… the parasite Peter (Gascon), as she pesters the poor but hard-working Lucho (Guerrero).

What’s a father to do but to care for his children’s well-being. Though Nosotros Los Nobles is an over-the-top comedy on telenovela socialites, whom people love to make fun of because they don’t necessarily watch this type of content. It’s easy comedy, just like when we make fun of “dumb blonds,” “fat people,” or any other minority. It doesn’t make it bad or wrong, but I did laugh less than I would’ve thought, meeting most of the jokes with a familiar “oh, I get it. That’s funny.” And maybe adding a chuckle.

The acting is pretty good, and it serves the best when dealing with Javi and Barbara, who are the characters that change the most by the end, which I think does justice to the whole story. It’s never forced and it feels natural — as if the knot had been left loosely done, because you couldn’t have it nicely tied. Then there’s Carlos Gascon, who gives the film its comical punch once his plan is revealed and he shares his scenes with Gonzalo Vega. It was the most hilarious, and  perhaps most memorable joke in the whole thing.

Despite its success as a decent family comedy… with some PG-13 jokes and scenes, which mostly involve Juan Pablo Gil’s character’s use of non-explicit drugs and sex-ventures, but the movie is pretty clean; Nosotros Los Nobles is… kind of forgettable. But you know~ only time will tell whether or not the movie and its characters will remain in the public’s subconscious.