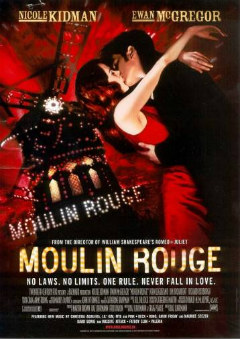 Can you believe it’s been ten years since Moulin Rouge! was released in theaters? And after so many repeated viewings, it’s still as good as ever.

The film is the story of an English writer named Christian (McGregor), who leaves home to become a bohemian writer, against his father’s better judgement that knew he’d end up falling for a courtesan of the Moulin Rouge.

In a chance encounter, in which a narcoleptic Argentinean drops from his ceiling, Christian gets his first writing gig for the newest play, Spectacular Spectacular, which they are trying to pitch to the Moulin Rouge’s owner, Zidler (Broadbent). For this, they need the help of Satine (Kidman), a courtesan who mistakes Christian, the penniless writer, for The Duke (Roxburgh), whom they are looking for as investor of the show.

The story is, of course, a mash-up of Alexandre Dumas fils’ Camille — which was also adapted into that 1936 version with Greta Garbo as a courtesan — Henri Murger’s La Vie de la Boheme, and a bit of Orpheus in the Underworld. The soundtrack contains a remix of every possible great popular love song mixed in with a little tango, electronic rock, and even some can-can and Bollywood. The over-saturated colors — staple Luhrmann right there — hyperactive editing, lush set design and wardrobe revived the musical genre for a good chunk of the last decade, and it’s aging decently.

The film has an impressive quality to let us be absorbed by all of it from the beginning, which does happen to be terribly slow but counterbalanced with dizzying cuts that shift into song, it’s hard to notice. It is like taking some Absinthe and forget about it all, until we — like Christian — see Satine… the Sparkling Diamond coming down the ceiling. Nicole Kidman is everything in this film. She’s sultry, enchanting, she makes us laugh in that bit of poetry reading, she’s vulnerable, weak, and strong. If you wanted to pick her best scene, it’d be difficult as one seems better than the previous.

In the story, we are Christian… the new kids in town, eager to believe that love is the most wonderful thing. Despite the film telling us what is going to happen — seriously — it doesn’t really matter, we are still hoping that they get together. McGregor works really well, almost like he’s truly a kid falling in love for the first time.

The rest of the film is all about Broadbent, Leguizamo, and Roxburgh who shine as Zidler, Toulouse and The Duke — especially in that number of Zidler singing Like a Virgin to The Duke, and him joining in is perfect to set the tone of what the film is about — a throwback at everything pop culture through very pink-colored glasses and serpentin.