Nightmare Before Christmas, The 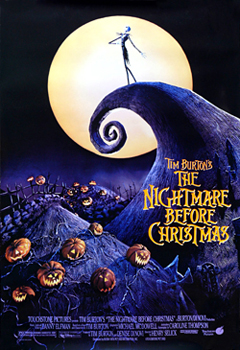 ‘Twas a long time ago, longer now than it seems in a place perhaps you’ve seen in your dreams. For the story you’re about to be told began with the holiday worlds of auld. Now you’ve probably wondered where holidays come from. If you haven’t I’d say it’s time you begun.

The Nightmare Before Christmas follows “The Pumpkin King” Jack Skellington (speaking voice by Chris Sarandon, singing voice by Danny Elfman), a resident of Halloween Town who has grown tired of doing the same routine for Halloween every year. The day after Halloween, Jack wanders into the forest and discovers that there are trees with portals leading to different places. The one with the Christmas tree appealed to him the most, so he ends up visiting Christmas Town and falls in love with everything that Christmas is all about.

Jack returns to Halloween Town and spreads the word to his fellow citizens about Christmas and tries to get everyone into helping him put on Christmas instead of Halloween. Thing is, not everyone grasps the Christmas concept well and Jack’s plans do go according to what he wanted. Even worse for Jack, his plans of capturing Santa Claus (Ivory) and bringing him to the town backfires when Santa lands in the hands of Oogie Boogie (Page), a villanous bogeyman who loves to gamble.

Thinking about it, there are many things in The Nightmare Before Christmas that makes the film enjoyable to watch. I remember the first time I watched this years ago after hearing many great things about it and while I thought it was very good, I had the sensation that it was somewhat overrated. Maybe I should have watched this back in the 90’s? I didn’t watched it back then out of lazyness, but I was aware of who Jack Skellington was – if you have never heard of this film, you might as well be living in a cave – and this film being heavily associated to Tim Burton, someone I admired for directing Batman Returns, Edward Scissorhands and Sleepy Hollow. Yes, I know it may sound strange to see someone watching those films before watching The Nightmare Before Christmas. Well, watching it again recently kind of made me understand why people I know love it and even go batshit crazy about Jack Skellington. I think that I’ll eventually take it back about calling it overrated.

There’s two factors that makes The Nightmare Before Christmas work very well. One of them is the animation employed here, which was impressive at the time and if you look at the film today, it still works very well. Halloween Town looks like a fascinating place to visit and dream about. Easily a paradise for those who enjoy Halloween every year in its true form. The second factor, and probably the most important of them all to make this work, is Danny Elfman. Combine the animation along with his work here and those two factors alone explains the love that the film gets. Personally, I think that without Elfman, The Nightmare Before Christmas wouldn’t be that impressive as a whole. Unlike most films/tv shows where you see Elfman on the credits, he actually sings in the film and very well, I may say. He’s definitely the star of the film without a doubt.

After watching this again, I wish that it could have been at least a few minutes longer because the storytelling flies pretty fast in 76 minutes. The relationship between Jack and Sally (O’Hara) could have done with better build-up to enhance the final scene between them. Also, Oogie Boogie doesn’t feel like an strong antagonist due to lack of screentime, but the film is pretty much about Jack. And to be honest, while Elfman’s songs in the film are good-to-great for the most part, none of them live up to the high quality of This is Halloween, a song that pretty much enhanced the film’s intro.

All in all, highly recommended film for those who enjoy animation and musicals. If you really like both, you’ll definitely enjoy The Nightmare Before Christmas more than I did. I’m not the best judge for this film, but I wouldn’t deny that it’s a great film to watch.