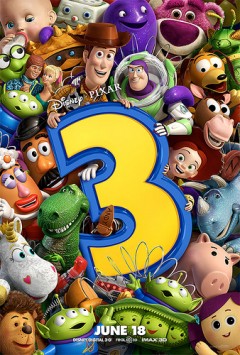 Whatever your thoughts are about Toy Story and Toy Story 2, if you got the chance to grow up and grow old with the Toy Story franchise, Toy Story 3 will pull your heart strings. I wasn’t emotionally attached to the franchise, and I still felt the nostalgic ending, quite reminiscent of the ending in the Winnie the Pooh books. That of having to grow up and let go.

Toy Story 3 brings back our favorite toys — including Woody and Buzz — as they face their existential crisis… what are toys when they aren’t played with them anymore? After all, their owner Andy is now heading off to college. It is obvious that he hasn’t played with them for years, and the toys are trying anything in order to get him to open the toy chest in hopes of rekindling their childhood friendship.

As Andy begins packing, he seems to be unable to put his faithful Woody away in the attic, so he adds him to the “College” box, while putting the rest away in a black bag headed for the attic. However, the bag is mistaken by Andy’s mom as garbage, so she throws them away. The toys, misunderstanding this accident as Andy wanting to throw them out like trash, decide to head off to the pile of donated toys for the children’s daycare.

In there, they are welcomed by a Lots-o-Huggin’ Bear, who shows them how wonderful the daycare is… not. Soon, Andy’s toys will find out that little kids are not very suited to playing with them. So now, they will have to plan their escape to return to Andy before he heads off to college.

First thing’s first, I saw this dubbed in Latin American Spanish because Disney is unable to bring this dubbed and subtitled, even though people who grew up with the franchise and are fans are probably capable of reading subtitles well enough. Despite that, the dubbing didn’t take much from the enjoyment of experiencing this film. Though, I have my doubts on how well Spain’s Spanish dub works in a particular scene.

I am also not sure whether Disney will be showing this only in 3D theaters or if they will have a 2D print. In any case, I feel like the film will also be enjoyed without 3D glasses just fine.

What stands out about this is their inclusion of very tense moments, rivaling many action films, with a lot of humor — oftentimes taking jabs at Ken, which is just… REALLY funny. And then there’s that feeling of sadness that creeps in from time to time — which Pixar is mastering — because we know it’s the end. And Toy Story 3 SHOULD be the end, the final installment of the franchise. There shouldn’t be any made-for-TV sequels, nor attempts to make a TV series. This, as it stands, is the perfect cycle, and shouldn’t be tampered with. This should be Pixar’s trilogy legacy.