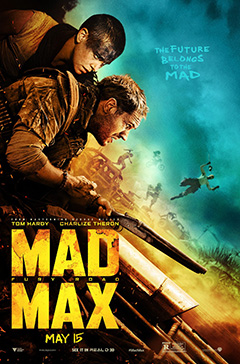 Mad Max: Fury Road was probably one of the least expected films of the 2015 line-up, it didn’t even make it to our Top35 Most Anticipated Films of 2015– and in one single week became the must-see of this blockbuster season. However, the least you know about it, the better.

George Miller does a quick crash course on his Mad Max trilogy to bring us all up to speed with his post-apocalyptic world — 45 years after the collapse of civilization, though catching up on your own is a plus as you’ll get a more rounded character for Max (then played by Mel Gibson, now played by Hardy). In here, as seen before, we entered the scorching devastated desert when Max is captured by the War Boys, an army of lunatic brainwashed young men under the orders of the tyrannical leader Immortan Joe (Keays-Byrne, back as another baddie in the MM universe).

Used as a high-octane blood bag by an eager War Boy known as Nux (Hoult), they’ll run into the rebel Imperator Furiosa (Theron) on an adrenaline pumped race for freedom, survival and redemption.

The first thing you’ll be served in Fury Road will be the gorgeous cinematography of intense saturated plains of sand and more sand- seriously, sand hasn’t looked this amazing; the color palette is stunning and adds texture to its setting, which paired with Miller’s masterful take on action sequences give us nearly 2hrs. of non-stop (80%) old-school car chasing and fighting. Miller’s brushstrokes are the control of chaos. And controlling chaos he does when faced with camera cuts and movement that might make viewers dizzy (I’m looking at you Edge of Tomorrow), in here, everything flows and matched to Junkie XL’s soundtrack, it creates an incredible immersing experience. On the big screen (and with 3D), it’s as thrilling as being in the chase yourself. It’s stressful at times, but it’s the excitement of it all.

Then there’s Theron (and, to a degree, Hoult too), of course, who is as feral and guarded- you can see a lot of Ellen Ripley and Sarah Connor in Imperator Furiosa. Boy is she good~ There isn’t much to build her character that hasn’t been mentioned on promo material (thank gawd, I missed all of it), but Theron is a badass and sells the character for all her qualities. That’s the thing about Max, we’re in the never-ending story universe where everything that surrounds him becomes another story, and the new people that we meet ultimately become more interesting characters than him.

If you’d seen Miller’s past Max entries, you’ll know he can squeeze the hell out of an action sequence; with the technology and budget available, he’s managed to breathe much needed fresh air into the action/sci-fi/post-apocalyptic genre. For most fans of the series, it was 30-years worth it.