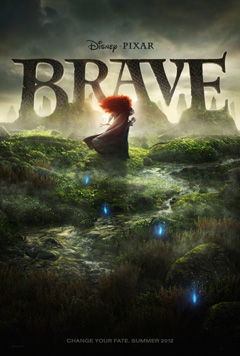 I have very, VERY strong feelings about Pixar and Disney’s latest because Brave is the first Disney princess movie that isn’t about a princess who NEEDS TO end up with a prince [1].

Merida (Macdonald) is a feisty, bushy, red-haired princess who isn’t into tradition — I have to admit that a tear or two fell the moment her dad, King Fergus (Connolly), gave her her bow and set of arrows because it reminded me of dads giving their little girls their first football kit complete with their favorite team’s shirts.

However, as much as I would have loved Merida to embark on an action adventure where she gets to fight off enemies from a distant land and whatnot, Brave is ultimately the story about a mother and a daughter. Brave is the story of families torn apart by pride.

Being of age, Merida’s mother, Queen Elinor (Thompson), is adamant that her daughter marry one of her unsuitable suitors for the betterment of the Kingdom. An understandable situation for the time and age, but unacceptable to Merida, who longs for her freedom to be… and her freedom to choose. As teenagers do, however, Merida visits a witch (Walters), who will give her a potion that will set in motion the destruction of her family and the whole Kingdom.

I have to admit I wasn’t expecting what I got, but in a really good way. I know everyone is so into having epic battle scenes and that’s why so many of you loved Huntsman so much, but I appreciated scaling down the scope of Merida’s stakes — Pixar isn’t about the epic, it’s about the little things that amount to so much more. Merida may not be literally in a battle to save her Kingdom, but she’s saving her family… which, in the end, IS the base of the Kingdom.

As with any Pixar-related project, animation is luscious — richly textured and enhances the whole story to place it in Scotland. I wish I had seen this with the original track, but alas… the Latin American Spanish dub wasn’t half bad at all. Jokes were funny — laugh out loud funny — sometimes quite scary (honest to Gawd, the bear scared me), and deeply moving at times. I mean, Disney is master at dubbing their stuff. Seriously.

By the end of the film, I think there was a point when I wonder whether Brave was going to “go there,” because I thought Merida had been reckless and we must learn that things have consequences. In the end, I don’t think they managed to. I have no idea if it had been better writing, but I think it would have had a deeper impact on me emotionally. More than the broken families because of pride aspect of the film did.