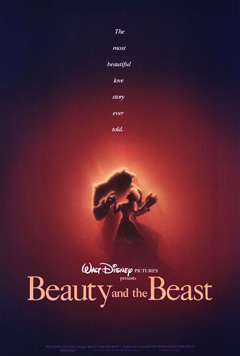 For the past week, I’ve been a romantic mess. I don’t know what it is, but I guess it was the perfect opportunity to catch the rerelease 3D-converted  version of Disney’s modern classic Beauty and the Beast — tale as old as time.

I will not bother to comment much on the 3D conversion, which I thought darkened the picture and lost contrast. But apparently, fans of the film weren’t bothered by it — though, yeah, the Be Our Guest sequence as well as the Beauty and the Beast ballroom dance, and some of those forest scenes looked kinda cool. This is also the first time I’ve heard the Español Latino dub consciously since I first watched the film back in 1992, so it was certainly a little bizarre having grown accustomed to the original English audio.

But let’s be honest here, Beauty and the Beast rocks. Barely scrapping the 1.5 hour mark, the pace of the film is really agile, presenting scene after scene that means something for the story. While the credits rolled, I sat there thinking if I had seen any scene that felt like filler content, and there was none. The writing team made good use of presenting their characters to us, giving us important information to push the plot forward and move to the next.

At the expense of that, giving it a second thought, Beauty and the Beast might seem like it’s a bit rushed, but in between the romance build-up, the comedy, and musical sequences — which are all sing-a-long worthy — it seems like enough. Sure the villains of the movie aren’t on par with other Disney villains like Maleficent (Sleeping Beauty), Cruella de Vil (101 Dalmatians), Ursula (The Little Mermaid) or Jafar (Aladdin), but who needs Gaston and Lefou when you have a redeeming Beast?

The art looks as distinctive as ever, a singularity in style that is seldom achieved in richly developed CGI animation, and makes you miss 2D animation every time we see a newly polished CG character that may look slightly like the previous version you just saw a month ago. Though, I think the first 30 minutes of WALL*E get as close to stylistic distinctiveness as it possibly could.

Before we were trying to get Pixar’s Brave, or had Rapunzel (Tangled), Tiana (Princess and the Frog), or Giselle (Enchanted), Belle was as close as we could get to a modern not-a-Disney-Princess.  Though, now that I’m older (I’M OLD!!), I did take Belle’s feistiness as a little annoying at times, so I could understand Beast’s grumpiness, which made it all the more funny to watch.

Overall, Beauty and the Beast is aging quite decently for a picture that’s a little over 20 years old now (EFF, I’M OLD), and it’s definitely a Disney staple for the fun musical aspect of it thanks to Alan Menken’s genius ;P