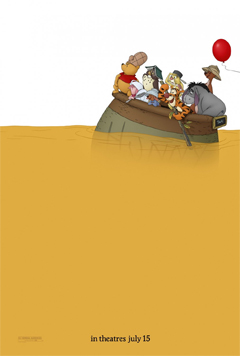 Deep in the Hundred Acre Wood, we find ourselves engulfed in one of the sweetest and most refreshing children’s movies in years, Winnie the Pooh. Although the film is geared toward the youngest of kids, plenty of older audience members will be smiling and laughing throughout the short, nostalgic animated film.

As many Disney films usually are, Winnie the Pooh is preceded by an animated short about Nessie, the Loch Ness monster. Simple and touching, we’re shown another side to Nessie, who must hunt for a new place to live after her pond is taken from her by men constructing a golf course.

From there, we’re brought into Christopher Robin’s bedroom and introduced to our stuffed friends by the narrator (Cleese) before delving into the Hundred Acre Wood. There’s not much to tell about the story, as Pooh (Cummings) has always been a bit of a predictable fellow. One thing and one thing alone is on the bear’s mind, and that’s honey. Aside from his cravings, we’re advised that Pooh has a very important thing to do and soon find out that his good friend Eeyore (Luckey) has lost his tail – making him even gloomier than his usual self.

The whole gang of characters gets together and Christopher Robin (Boulter) offers them a prize for finding Eeyore a new “tael” – a pot of honey! But after Pooh goes off on his own to look for more honey, he finds a note written by Christopher Robin that he can’t read. Once Owl (Ferguson) deciphers the note, he sends them all on a wild hunt to save Christopher Robin from the imaginary monster named “The Backson!”

Running at just over an hour, the animated film works perfectly for children, and could even be used as the perfect first film for most. While many films are pushing for different animation styles – especially 3D – Winnie the Pooh has a simple and beautiful hand-drawn art style that will draw anyone in. The animation and the page designs flow together within the movie to the point where even the spectacular typography works as a plot point. The story for the film was inspired by three stories from the A.A. Milne books and keeps you engulfed in this innocent and gentle world from beginning to end.

The voice acting really adds plenty to each of the characters, and it’s pleasant to hear the voices fitting them so well. And what’s a Disney movie without a song or two? Zooey Deschanel, Kristen Anderson-Lopez, and Robert Lopez all provide wonderfully catchy songs that add a new flare to the classic tales, and Henry Jackman provides a score that will wash waves of nostalgia over anyone who grew up with the series.

Winnie the Pooh will undoubtedly leave you full of a warm and pleasant feeling, which I’m sure is exactly how Pooh feels after eating a large pot of honey. Anderson and Hall truly create an animated film that will delight adults and children alike – even those who have never read the a single Pooh story. Winnie the Pooh is gentle and heart-warming and it’s just the right kind of film for anyone who wants a simple film with plenty of chuckles and smiles.