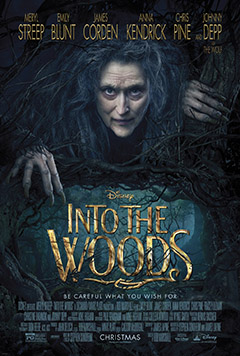 With the success that ABC (Disney’s TV parent company) has been having with the revamping of fairytales crossovers in Once Upon a Time, James Lapine and Stephen Sondheim’s fairytale mish-mash where Little Red Riding Hood (Crawford) met with Cinderella (Kendrick), Jack (from the beanstalk, Huttlestone) and a dash of Rapunzel (Mauzy), fit like a glove.

WARNING: Into the Woods is a musical through and through, and Rob Marshall doesn’t ease anyone in. There’s but a few lines of dialog, the rest? It’s all done into song.

WARNING 2: Brush up on your fairytale knowledge.

Sondheim’s music and lyrics are best known to off-Broadway (international) fans for Tim Burton’s adaptation of Sweeney Todd: The Demon Barber of Fleet Street, in which we saw Johnny Depp as the brokenhearted bloodthirsty barber looking for revenge by getting rid off the vermin of the world — how Crime & Punishment [1] of Sondheim — in none other than human meat pies. Though Into the Woods isn’t entirely as grim or as twisted, many saw themes that weren’t exactly Disney-friendly, the Broadway show was riddled with dark humor.

Would a Disneyfied adaptation do justice to the material?

Meet the Baker (Corden) and the Baker’s Wife (Blunt), unable to have a baby, they run into the Witch (Streep) who tells them that to break the spell that bounds them childless, they must find her a cape as red as blood, a cow as white as milk, a shoe as gold as the sun, and hair as yellow as corn. But… what really happens after the Happily Ever After?

While I don’t see Sondheim’s music and rhythm too much attuned to mainstream pop flare (unlike the mass-appealing Frozen, for example), I could see the Agony number that sees both princes charming (Pine and Magnussen) in a song-off about the pains of unrequited love (or constipation) having a bit more punch in the film than the Prologue, which is my favorite one. The biggest (and probably only) adaptation improvement is production design. The famous Woods where all the action happens is rich and even quite the scary sight. The third act also seems slightly less silly when you actually interact with ever the giantess Frances de la Tour (who played Madame Maxime in the Harry Potter series).

Other than that, I found Into the Woods a competent adaptation — nothing much was cut off the original material, so you’re safe if you don’t watch the other — but lacking that dark humorous punch and the tongue-in-cheek jabs that the 1991 Broadway performances with Joanna Gleason and Kim Crosby in Blunt’s and Kendrick’s characters. The Baker’s Wife is quite the character in the material, so I was kind of disappointed with Blunt’s performance considering I had reinstated it with Edge of Tomorrow. Even Meryl was kind of underwhelming.

My favorite minor characters were, possibly, Cinderella’s stepmother (Baranski) and her step-sisters… especially Lucy Punch- girl’s hilarious (Don’t miss her on Let Them Eat Cake). Also, props for keeping the bloody ending in the Cinderella story.

You can actually rent/buy the 1991 Broadway production on Amazon [Instant][R1 DVD][Bluray].