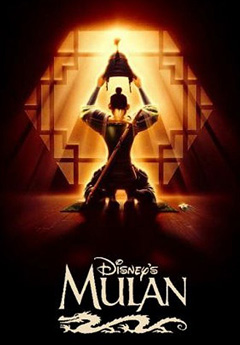 Actually… I take it back, what I said about Mulan in my Why Little Girls Should Grow Up with Studio Ghibli post. At least when we talk about this film and not the subsequent Mulan stories.

Based of an anonymous the Ballad of Mulan poem that’s based on a folktale that has been repeated through generations and developed into films, series, and operas. Mulan tells the story of Hua Mulan, a woman who dressed up as a man and fought in the army for twelve years.

Disney’s version starts with the invasion of the terrible Shang-Yu (Ferrer), leader of the Huns, who feels the emperor’s Great Wall is just to piss him off. On the other side of the country, Mulan (Ming-Na), who after a failed — but really hilarious — attempt at the matchmaking house, is shamed into thinking that she will never uphold her family’s name.

Because of the Huns’ invasion, the Emperor (Morita) sets the order that a man from each family must go out and fight. However, since the Hua family only has Mulan, her weaken father is forced to take the imperial edict. Mulan is up in arms saying her father shouldn’t be going to war in his condition, but they must uphold the family’s name — knowing this, Mulan sneaks in to take his father’s armor and his imperial edict, and goes off to war in his name.

The family’s protective spirits awaken, and decide to send the family’s Great Stone Dragon to be awaken by the little one, Mushu (Murphy). There’s a problem, the Great Stone Dragon shatters to pieces, and now Mushu alongside the Lucky cricket Cri-Kee are off to help Mulan achieve her glory!

There’s some talk in China at the moment, about how Hollywood can take their culture re-package and sell it back to them so freshly. And I think it’s true about Disney’s Mulan. Compared to China’s 2009 version of Hua Mulan (starring the awesome Zhao Wei), Mulan is dynamic in all its 88min. in running time. Yes, sure — it doesn’t look completely Chinese and some even say it’s “too Japanese” but if you look past those details, we have a story about a girl who saves a whole nation, and defeats a huge army… Mulan has a lot to stand on, it’s about a girl trying to accept herself and trying to make her family proud.

Mulan doesn’t go off to war in her father’s armor because she wants to be a man and play war, part of her wants her father not to be hurt, and the other is to proof that she’s not a complete failure. Plus, it’s got tons of humor! I couldn’t help but to laugh out loud in so many scenes spread throughout in sequences that should have been, at least, a little bit tense. Like the “ugly concubines” comment. Never gets old.

The animation is still great, detailed and crisp. It’s important to note that the computer sequence of the Huns coming down the snowy mountain. It still looks great, and it’s really REALLY intimidating.