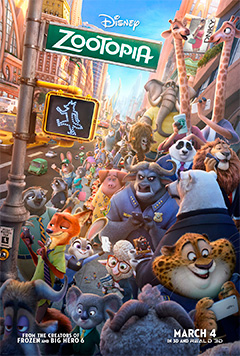 It’s been a while since I’ve seen an animated movie that deals with relevant social issues without being preachy. Kudos to you, Disney!

Zootopia is about a world when long ago mammals of all kinds decided to lay down their differences and live in civilized harmony. In here, we meet Judy Hopps (Goodwin), the first bunny cop of Zootopia, and Nick Wilde (Bateman), a con artist fox, who will reluctantly join forces to solve a case of missing animals.

The film starts straight-forward enough, with Judy basically black-mailing Nick into helping him find a missing otter (one of the many missing animals) in 48 hours, otherwise she’d lose her job, because Chief Bogo (Elba) doesn’t believe she has what it takes. However, after some misadventures (and an opportunity to see beautifully designed places) the story becomes a wide-reaching conspiracy that could destroy Zootopia’s society, when the relationship between “prey” and “predator” becomes tense.

From the very beginning, you see that Zootopia is a story about dealing with bias and prejudice, as well as accepting and embracing diversity, and it teaches it in a relatable way with moments that can be quite poignant. You can see it everywhere, from the “inclusion initiative” promoted by Mayor Lionheart (Simmons) and  sheep assistant mayor Bellwether (Slate), prohibited terms and the use of slurs, how Judy and Nick learn to cooperate and care for each other despite the historical distrust between bunnies and foxes, to the terrible “you are not like them” line that always backfires.

That said, the world of Zootopia is beautiful. The animation is, obviously, top-notch. The designs and the color palette of the whole city — with its microclimates — how they get around to all the different animal sizes; it’s imaginative, and you know you will have to watch the movie again in order to catch it all. And that’s just part of the amazing world building they gave to this film. Many of the well-known animal characteristics were used in comical ways when used in obvious and contrasting ways.

Zootopia is a buddy cop comedy movie with the feel of a classic detective film. This is aided by Michael Giacchino’s music, who, besides the mostly upbeat score, tosses music cues that remind you of Nino Rota… especially during the Godfather reference. Talking about references, there’s a Breaking Bad one! In a Disney movie!

And then, there’s Shakira as pop star Gazelle, whose song Try Everything [MV] is cute and optimistic, even if her presence isn’t really that important, and gives the film a generic conclusion.

But disregard that, just take your kids to their first film noir, where talking animals will teach them not to be prejudiced morons through adventure, laughter and some tears.