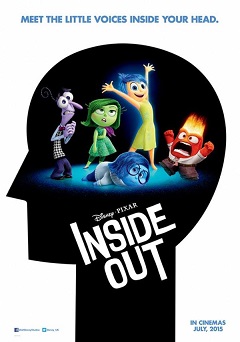 I only knew a few things about Disney and Pixar’s latest film before watching it on the big screen: Amy Poehler’s voice would headline the film, and Bill Hader was part of the voice cast. Other than those two being attached to Inside Out, and being aware that Pete Docter (Monsters Inc. & Up) was directing the film, I knew nothing more about it, and had to watch it dubbed. I even thought Mayim Bialik (The Big Bang Theory) was one of the main characters at some point, but upon further investigation realized it was Phyllis Smith (The Office). I admit that the casting choice actually made more sense along with the obvious visual standpoint. While having Docter directing seemed like further reassurance for a great film, I wasn’t expecting it to be quite possibly the most complex Disney-endorsed animated film of all time.

Inside Out follows 11-year-old Riley Anderson (Dias)… actually, the film often follows five personified emotions inside Riley’s mind– or Headquarters, as the emotions call it– since her birth. Joy (Poehler) was the first to check out on Riley, only to be followed by Sadness (Smith), Fear (Hader), Disgust (Kaling) and Anger (Black).

From the moment Riley was born, all the five emotions have been responsible of reacting to Riley’s circumstances and forming her memories, which are housed in spheres that produce a certain color depending on the emotion of the memory. The most important memories, which are known as “core memories,” power five “islands” that each reflect a different aspect of Riley’s personality: Family Island, Friendship Island, Hockey Island, Honesty Island, and Goofball Island.

Sounds ambitious and complex enough so far? Well, yes. But there’s more to Inside Out than just only what happens inside Riley’s mind since we also get to see the world through her eyes, and what happens inside her mind stays inside her mind (sort of). However, some external circumstances in Riley’s life, which includes moving from  Minneapolis to San Francisco with her parents (voiced by Lane and MacLachlan, respectively), and conflict of interests at the Headquarters end up creating a chaotic scenario with big things at stake for the girl, who is on the edge of adolescence, and everyone internally (or externally) involved with her.

As I said before, Inside Out will go down as the most complex Disney-penned animated film of all time, which is mostly due to its exploration of how the mind of a human being works. Ronnie Del Carmen and Pete Docter’s directing skills, alongside a very strong and sharp screenplay paints not only a very fun, interesting, engaging and very emotional film to watch with plenty of big laughs, the latter being a norm for most Disney films; but it also veers into drama territory, a first for co-stars Smith and Poehler, as well as Kaling. Most notably when we’re introduced to Riley’s imaginary friend, Bing Bong (Kind), pushing the film into a very sad moment that could make anyone tear up– and it actually challenges the notion of having to be always positive in life, especially through the relationship between Joy and Sadness, which serves as the catalyst for the chaos that ensues within Riley’s mind that also alters her real-life relationships with people. Life isn’t always about constant happiness, and Inside Out is very aware of that.

Speaking of Joy and Sadness, they’re the ones who receive most of the character development, while the other 3 emotions are more like supporting sidekicks. However, Docter uses the supporting emotions cleverly in terms of how to operate for a unprepared scenario to sad and hilarious results, while Joy and Sadness try to figure out how to stabilize Riley’s mind and put their differences aside. Despite Joy living up to her name and being the dominant emotion for the most part, Sadness steals the show since she operates as the voice of reason in stark contrast to Joy’s leading, whose main objective is to keep Riley’s life happy no matter what… even if that means isolating Sadness from anything involving Riley’s life, which can be seen as a uncool move. But Sadness also wants to stop feeling useless and be an important part of Riley’s life, which sets up everything that happens in the story.

By the way, you don’t get to see a film with a highly ambitious concept made to the budget of higher than US $100M very often. But Pixar took the risk and it paid off highly. Barring a colossal f*ck-up from the awards voters, Inside Out will mostly likely win Best Animated Picture — it could even be a strong Best Picture candidate at the 88th Academy Awards, if Disney mounts a strong campaign– and it ranks toe-to-toe with Toy Story 3 and The Congress as one of the decade’s best animated films.

Highly recommendable to watch for anyone, regardless of age. Why? Because Inside Out exists within the head of a child and it taps into most (if not all) of the emotions that most of its audience has felt, is currently feeling or will feel very soon.