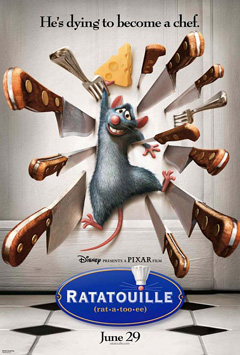 Ratatouille tells the story of a rat named Remy (Oswalt), whose dream is to become a chef. He has a knack for mixing flavors and smells, unlike the rest of his numerous family (or me), Remy has dreams. Good old chef Gusteau’s (Garret) motto has been imprinted into Remy’s psyche “Anyone can cook,” and this little rat can.

During a hectic escape, after a failed attempt to get saffron, Remy loses his family and ends up “stranded” in Paris. With his mind, in the shape of Gusteau, playing tricks on him, Remy ends up in the backdoor of Gusteau’s restaurant which has lost one of its Michelin stars due to a killer review by Anton Ego (O’Toole), who detests what the Gusteau brand is becoming thanks to the cheap eagerness of head chef Skinner (Holm), who’s made every possible frozen junk under Gusteau’s image.

There’s also a new addition to the Gusteau’s kitchen, a scrawny boy named Linguini (Romano) who is just hoping to keep a job as a garbage boy, until he messes up with the soup. Remy witnessing the disaster, steps in to fix it, and their rat/human adventure begins.

Leave it up to Pixar for giving a movie in which rats are in a kitchen — preparing our food — and letting its audience border that fine line of wonderment and complete disgust. Because those are some cute rats, but once they show them all in groups, it’s like there’s something crawling up our skins.

Patton Oswalt’s voice acting is quite effective here, he’s a very relatable individual — have you seen him on United States of Tara? — and it helps his Remy to be even more relatable. Plus, the graphics! How amazing was the food in the film? It’s important to highlight the work that went into this process, and the result of pretty organic-looking food. It almost feels like you can taste the dishes… cooked by a rat.

While Ratatouille has a few chuckles at the expense of the tiny head chef Skinner, the story is mostly a drama. It is the coming of age story of a rat trying to follow his dreams, even if the odds are against him. A rat that learns how to stand on its own two (or four) feet, and finds a place where he feels at ease. Neither a rat nor a human being, but no one is asking him to choose one or the other. The film is also part light love story, with a slightly aggressive and ironic Colette (Garofalo).

In many ways, the work of a critic is easy. We risk very little yet enjoy a position over those who offer up their work and their selves to our judgment. We thrive on negative criticism, which is fun to write and to read.

However, the best part of it has to be when Ego, against all odds, tastes the ratatouille prepared by Remy, which brings back memory of his mother. It is that power of taste memory, how the taste of a certain chocolate reminds you of something in your life, just like the smell of hot cocoa can bring memories of the holidays. I think it’s at that point when I feel a lonely tear drop from the corner of my eye.