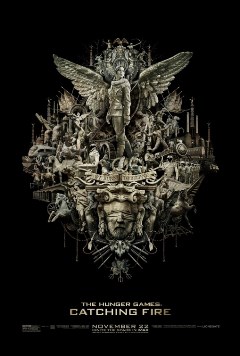 I’ll be honest with you: after watching the first film last year, I wasn’t anticipating the sequel that much. However, I ended up buying an afternoon ticket last Saturday to see The Hunger Games: Catching Fire.

The second film picks up some time after the 74th Hunger Games tournament and shows the consequences of the unusual double victory of District 12’s Katniss (Lawrence) and Peeta (Hutcherson): the sensation of a rebellion among Panem’s districts is cooking and that’s not pleasing President Snow (Sutherland) at all. Just before Katniss and Peeta are ready to embark the traditional Victor’s Tour, Snow reunites with Katniss in hopes to put an end to the emerging rebellion. However, things doesn’t go as planned for Snow and just in time for the 75th Hunger Games tournament, a new rule is added because of the “Quarter Quell”, which allows the Capitol to add a twist and this time, the female and male contestants will be selected from the exisiting winners of the previous Hunger Games editions. And with a news gamesmaker in Plutarch Heavensbee (Hoffman), who also serves as an advisor to Snow, things aren’t looking pretty for Katniss at all.

One of the things I also enjoyed was seeing the Panem characters — Gale (Hemsworth), Prim (Shields) and Mrs. Everdeen (Malcomson) — feeling slightly more important. Also, this film is packed with hints of sarcasm and lots of hat-tipping towards the first film. The acting from most of the cast is fine and made the characters feel real, but Jennifer Lawrence as Katniss is stellar as she commands the film and provides a solid range of expressions regarding everything (past traumas, feelings, morals, current events, etc.) surrounding Katniss. I’d say J. Lawrence (and Katniss) is a bigger treat to watch that the games itself.

While the film is great and sets up huge momentum for Mockingjay, there’s two thing that derails my interest a bit in seeing the final chapter of Katniss’ story being played out. The first one is the obvious issue of splitting the final book in two parts [1 & 2] which will end up with an uneven film treatment [see: Harry Potter and the Deathly Hallows Part 1 & 2]. The other one is with the film’s ending, which felt a bit thin in contrast to everything that came before it. Other than those issues, The Hunger Games: Catching Fire is worth a watch on the big screen and it’s one of the biggest surprises of 2013 for me considering I wasn’t expecting to enjoy it after the first film.