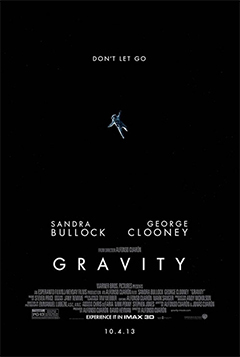 It’s always said that “in space, no one can hear you scream” — with Gravity, this statement is anything but true. Cries for help and an often mesmerizing score by Steven Price puncture the deafening silence of space, throwing one head first into a truly thrilling cinematic experience.

Alfonso Cuarón’s tale of two humans trying to survive is simple, pitting medical engineer Dr. Ryan Stone (Bullock) and long-trained astronaut Matt Kowalsky (Clooney) against the vast abyss of space and all the dangers it brings. Where Clooney is his usual charming and wise-cracking self as Kowalsky, even in the face of danger, it is Sandra Bullock who gives the performance of her career. So rarely does an actress prove that she can grasp the emotional weight of her seemingly inevitable death, but Bullock emotes that perfectly. The fact that Bullock is the film’s true star while Clooney is relegated to the supporting role is admirable, adding another self-reliant female character to genres as male-heavy as sci-fi and action.

There’s never a dull moment in Gravity, which delivers one engaging sequence after another – an incredibly lengthy one-shot sequence marking the first of them – with little time to breathe in between. At times it seems as though the audience may just begin suffering from the same anxiety as Stone herself, with legs shaking, breath being held in, and immense sighs of relief in moments of potential safety. It’s a terrifying film, no doubt, that captures something most who watch the film will never experience themselves: the constant fear of being trapped alone in space.

Where last year’s Life of Pi serves as the best proof yet for the brilliance of shooting in 3D, Gravity makes a strong case for the use of 3D in post-production. Proving that the experience doesn’t always have to be dark, dizzying, and ultimately useless, Cuarón utilizes the gimmick of 3D by offering up-close visuals and constantly manipulating spacial depth. Debris comes speeding forth from afar while drops of blood and tears float in the air, depicting that low gravity environment in the best of ways.

Never one to disappoint, Emmanuel Lubezki shoots everything as though it was of the utmost importance. Whether it’s an action-packed sequence that sends the actors tumbling against debris of all sorts or a simple shot of Bullock floating safely in a space station, slowly but surely curling into a fetal position, it’s nothing short of gorgeous. This constant beauty on screen never betrays its nature as an action adventure film, as Cuarón never allows the tone to shift out of overwhelming tension, even in its most contemplative moments.

Just as Cuarón’s Children of Men was a film that explored the enormity people would endure for the sake of survival as well as some of the darkest facets of humanity, Gravity is just as much a meditation on life, death, and humanity’s will to survive. Comparisons to Kubrick’s 2001: A Space Odyssey have and will continue to inevitably arise, and as apt of a relation of space and survival themed cinematic experiences that is, Gravity is a thrilling, emotional journey all its own.