Ides of March, The 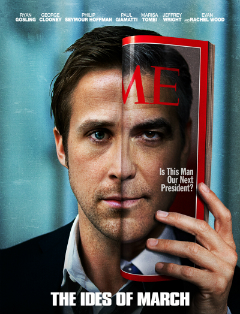 George Clooney and Ryan Gosling star in a power battle so intense it made me shiver. Based on the play Farragut North by Beau Willimon and adapted to the screen by, among others, Clooney, The Ides of March follows Stephen Meyers (Gosling), an intelligent and passionate young man who’s an adviser for Democrat Governor Mike Morris (Clooney).

Morris is trying to become the next presidential candidate, a feat many around him find impossible. But he has a team of men that will make sure it happens.

I really did enjoy this movie, though I can’t really give a detailed explanation here as to why. I guess I could explain a little — I used to study politics. I find it very challenging and somewhat sexy. OK, I won’t beat around the bush, power is sexy. So in The Ides of March I have not one, but two hot men battling it out in a war of wits and politics. I won’t deny it, it was hot. Very hot.

But hotness aside, in my opinion Ryan Gosling hit another home-run with this movie. Everything about his character Stephen Meyers was perfect. His intelligence, wit, sass, the transition from good to evil. Stephen is that young man that idolizes his hero and sticks by him no matter what. He is completely devoted to Governor Mike Morris and he will do just about anything to make sure he wins.

So what happens? Well, as in all political matters — a little bit of corruption, some back-stabbing, loss of faith and blackmail. Add to it one juicy scandal and you have the perfect political cocktail.

As a movie, The Ides of March is fast-paced, clever and interesting. You are shown the back-side of the political game, the highs and the lows — in where even the hero isn’t as good as you thought. I am getting giddy as I recall the movie. It was just that good. A perfect combination of a solid plot, great acting and directing — Clooney knew what he was getting himself into with this movie, and he made sure that it was executed to a T.

I, who know much of the corruption in politics, was left charmed. How can corruption be charming? Well, in the cat and mouse game of The Ides of March, although portraying a bloody chase, it portrayed it so artistically you can’t help but love it.