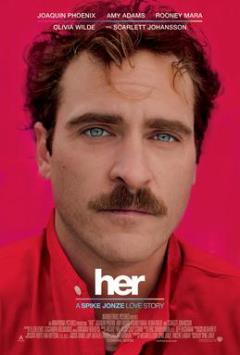 Spike Jonze’s latest film, Her, follows Theodore Twombly (Phoenix), a lonely man whose job is to write heartfelt personal letters for people not willing to do it themselves. We see Theodore’s every day life; he works on his letters, he’s on the verge of divorcing his estranged wife (Mara), and he tries to make sense of his life. One night, he purchases a talking high-end OS with artificial intelligence, designed to adapt and evolve like a human being, whom he chooses to be female. The female Operating System (OS) names herself Samantha (voiced by Johansson), and quickly establishes a strong friendship with Theodore that turns into something more romantic (and intense) as Samantha’s abilities evolve.

If the premise of a man falling in love with his OS is something that sounds most likely creepy and weird to you, that’s understandable. Who the hell would fall in love with his/her OS? Then again, Spike Jonze’s Her is set in futuristic LA where technology has taken precedent over human connection, and the relationship between Theodore and Samantha is something normal, even nonjudgmental. Kudos to Spike Jonze’s direction and screenplay as well as Johansson’s voice acting succeeding big time with strong character development, making the audience almost forget that Samantha is only just an OS as her relationship with Thedore grows stronger. This is enhanced strongly by Phoenix’s amazing performance as his facial expressions, quiet personality, and mannerisms that come with his character carry the film smoothly alongside Johansson’s non-physical presence.

Although most of the camerawork shows Joaquin Phoenix alone often, he also interacts with other human beings. The supporting cast is great: Chris Pratt is pretty good as Theodore’s boss, and Amy Adams worked fine as his best friend — Adams was more likable and better in Her than say, American Hustle. While the likes of Rooney Mara and Olivia Wilde had to deal with awkward yet important scenes interacting with Theodore, Her‘s most awkward scene was tackled by both Phoenix and Portia Doubleday — it’s something you have to see for yourself.

Her addresses two interesting ideas: one of them is loneliness and the need to connect with someone… or anyone, in Theodore’s case; from his failed marriage to an amusing cybersex chat with SexyKitten (voiced by Wiig) gone twistedly wrong, a blind date (Wilde) set up by his longtime friend Amy (Adams), and eventually his relationship with Samantha. Theodore and Samantha’s relationship doesn’t seem that different to online romantic relationships that people develop in our reality, but the OS aspect makes it stand out given Samantha’s quick access and connection with everything having to do with Theodore.

The other idea Her points out is the pursuit of happiness regardless of its origin or sources through Theodore, which goes along with the film’s nonjudgmental world. One of the film’s best lines sums up the film very well.

“We are only here briefly. And while we’re here, I want to allow myself joy.”

Despite Her being one of 2013’s best films by a very long shot, I’d still question if the film would work well if the genders were swapped, and Her makes a brief nod at this through Kristen Wiig’s hilarious cameo. Anyways, the film’s premise makes it parody prone, but under Spike Jonze’s command and his cast, Her is a very heartfelt film that is shockingly sweet, delightful, and even touching.