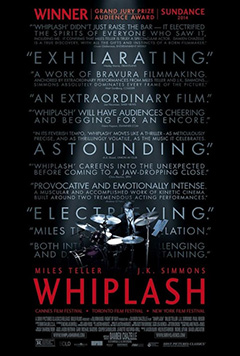 Of all the American films that I watched last year, Whiplash turned out to be the one that stirred the most feelings. I had an obvious attachment with the X-Men franchise, so I was marveled (no pun intended) with Days of Future Past, I was deeply moved by Patricia Arquette’s get-it-together mother in Boyhood, but it was the conflictive HORRIBLE characters presented that stuck with me, beating likability conventions.

Miles Teller plays first year hopeful drummer of a white-collar single-father (oh, hi, Paul Reiser~) background, Andrew Neimann, who wants to be one of the greatest jazz drummers. For that, he’ll need the guidance of short-tempered Fletcher (Simmons), who in search of music perfection, will mentally-manipulate you, shout and verbally-abuse the sh!t out of you to get what he wants.

While the abusive nature of mentor and student– reaching its highest point in that breathtaking last performance, might rub people the wrong way considering the growing trend of positive reassurance from parents in academic environments, it is the lack of likable qualities in these characters that makes Whiplash an unconventional story that’s not about a relatable underdog who works his way through obstacles thanks to his inspiring teacher— we’ve seen millions of those. The story is not even about jazz or passion for music [1], jazz isn’t about hitting marks or being perfect, that’s what I’ve been told a million times anyway~ it’s about manifesting feelings through it. Instead, Whiplash is about power, and power is intoxicating.

Damien Chazelle’s direction is competent, building on his short, but its driving force is the brash performances from Simmons (who reprises his role) and Teller, whose Neimann goes through the emotional roller coaster that Fletcher puts him through. These are not likable people, one is a prepotent jerk with a serious vindictive attitude, and the other one becomes a self-obsessed idiot who puts down his would-be girlfriend for a minute to achieve greatness– albeit, the Neimann family is also quite horrible, making Andrew’s musical achievements somehow lesser than his cousins’ football ones. This tension is intensified by Tom Cross’ editing and Justin Hurwitz’ compositions mixed with some standards (which disqualified the score from the Academy Awards), creating a thrilling pace throughout its nearly 2hrs of running time. Though nothing is as fresh or as playful as the jazz-inspired music in Jigarthanda, Whiplash and Caravan both drive much of the story, rousing the audience to that final cut-to-black, roll credits.