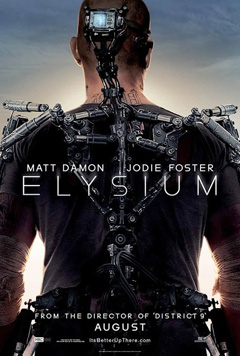 I was very surprised that District 9 became one of my favorite films of 2009 [1] because before it, I wouldn’t have given much consideration to sci-fi as a genre. This is one of the main reason why I had set my eyes on Elysium, I wanted it to blow me away. It’s partly my own fault because I was all giddy to see Jodie Foster, and was all pumped after watching and re-watching Wagner Moura on Elite Squad [1][2].

Like Blomkamp’s previous, Elysium paints our dystopian world in the year 2154 — obviously overpopulated while the rich 1% are able to live in a massive pristine habitable space station known as Elysium where life is pretty perfect, at the expense of the rest who still live in Earth ridden with diseases, poverty and the whole shebang. The city of Los Angeles seems to be full of Latin Americans who live stacked in cities that resemble some of our newly urbanized shanty towns.

Max Da Costa (Damon) is an orphan (when played by Damon-and-Leo-D-look-alike Maxwell Perry Cotton anyway) who grows up to be a problem youth as he dreams to one day be able to live in Elysium alongside his best girl pal Frey (later played by Braga). As time sets these friends apart and Max settles in a 9-to-5 job at a factory where his life is later threaten, he finds himself between life and death… and a coup d’état that will compromise the destiny of Elysium and all the inhabitants of Earth.

I love Matt Damon, I do. I love that he speaks a bit of Spanish (wise-cracking one-liners and all) in dystopian-L.A., but I can’t help shake the fact that the role of Max Da Costa feels better suited for a Latino. I can’t help shake the fact that my mind would have liked Wagner Moura in the role instead of Damon… but things are as they are. Acting-wise, the film seems fine especially with Sharlto Copley who seems to have had a lot of fun with the role because there’s all there was with these characters. I didn’t feel anything for them — nor Foster’s, Braga’s or Luna’s characters — and I just keep getting mad at myself thinking about them. Whereas you’ll have all these encountered feelings watching District 9, you’ll find that Elysium draws the line very firmly to tell us who are the good guys and who are the bad ones — the only one who seems to be a bit gray on the dark side is Foster as Secretary of Defense Jessica Delacourt, her power suit, her French and her Machiavellian intentions to take over the government, but all of that becomes nothing. This I would forgive in a mindless action flick, but not one posing as social-commentary.

The visual effects are good, though I’ll put the cheese that was Oblivion ahead of this by a thread. I do think that the overuse of shaky-cam this time around became a disservice visually since it had little to no reason to be that way, unlike D9, and actually made me dizzy from the get go.

Overall, though, Elysium is far from the worst film of the year… but could possibly turn into the biggest disappointment.