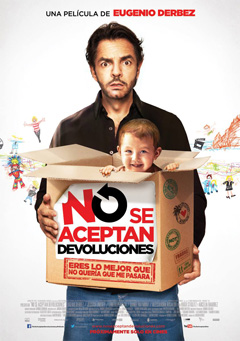 Hardcore Latin Americans by heart are familiar with all of Derbez’s comedic career, and the most casual of viewers (like me or anyone in my family) will recognize his voice as the Latino dub of Donkey on the Shrek franchise and Mushu in Mulan. In 2011, most condemned Derbez for succumbing to Adam Sandler’s Jack & Jill, in which he played a hillbilly version of a typical latino immigrant, but after the success of Instructions Not Included, he is once again being heralded as a champion for latinos… especially the ones in the US.

I would argue he was the better aspect of the cringe-worthy Jack & Jill.

No Se Aceptan Devoluciones follows Acapulco playboy Valentin (Derbez) in his player bachelor days as he beds the countless women he meets in his carefree life, until he meets the gringa hippie known as Julie (Lindsey), who will eventually show up on his doorstep one day with a baby girl she claims he fathered. Encountered with one of the many fears in his life, the cowardly Valentin starts his road trip to America to look for Julie who skedaddled leaving their daughter, Maggie (later played by Peralta), with him.

The film is conventional. It may look like it starts like any Sandler movie — there are different levels of 50 First Dates, Big Daddy, and Spanglish elements in here — even though Derbez cites films like Amelie, Cinema Paradiso and Little Miss Sunshine as some of his sources of inspiration [1], yet it’s Life is Beautiful the one that resembles Valentin’s father-superhero complex as he plays the non-English-speaking stuntman telling his daughter of the Batman and Titanic adventures with the cheese moon her absent mother may be having, just to ease some of the pain of abandonment. Unlike Sandler’s usual comedy, Derbez’s punchlines aren’t forced nor cringe-worthy (or ire-inducing), allowing us to grow fond of the relationship with his daughter, a Loreto Peralta that strikes a balance between the aura of the Dylan and Cole Sprouse twins and Abigail Breslin had as children.

While the humor might require some basic bilingual and bicultural knowledge to enjoy Valentin quoting Cuando Calienta El Sol [MV] popularized by Luis Miguel, or bursting out laughing when Jesus Ochoa cameos as himself in what he believes is an audition for Cuaron’s Gravity. There hasn’t been as clean humor as Instructions Not Included, despite some of the jokes [such as the ones that refer to certain pipes that need unclogging] that will go over most kids’ heads anyway. There are moments when the story reveals a minor twist that I’m unsure was necessary, but the situation creates enough tension to give some punch to the resolution of the major twist. I still believe Julie was unnecessarily spiteful, but Jessica Lindsey’s interpretation did soften her at moments, in contrast to some of the craziest stuff that was going on in that courtroom.

In a way, this one could turn into the biggest surprise of 2013.