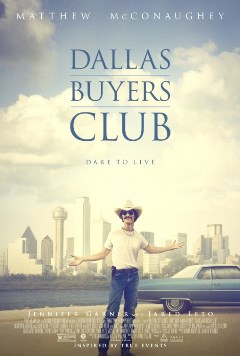 Jean-Marc Vallée’s Dallas Buyers Club sets itself back in 1985 around the time when public hysteria about AIDS was starting to reach its peak, but that didn’t matter much to Ron Woodroof (McConaughey). He works as an electrician, but his lifestyle was that of a rodeo rider-party boy-macho man and he lives his life to the fullest. That is until one day he passes out at home… only to wake up at the hospital and discover that he actually has AIDS — a disease he thought only gay people (whom he despises) could get infected by — and only has 30 days to live based on his lab exams.

Woodroof’s disease not only sets him up to fight for survival, but it also triggers the setup for the Dallas Buyers Club — a membership group that helps persons with AIDS and faces opposition from the FDA — as well as an unexpected relationship with trans woman Rayon (Leto), who also battles for her life alongside her addiction to drugs.

While Dallas Buyers Club is that kind of film that easily draws criticism from the LGBT community (and understandably so) for putting a homophobic character with questionable motives as the film’s hero and not fully preventing Rayon from feeling like a LGBT character trope as well as not casting a transgendered actress for the Rayon role, Dallas Buyers Club still manages to be pretty moving and showcases really great performances from its cast, especially Leto and McConaughey. While Leto’s Rayon boasted impressive make-up and a nicely restrained performance, McConaughey’s the one who carries the film entirely with Ron’s mannerisms and eccentrities as Dallas Buyers Club is the story of Ron Woodroof and the life changes he goes through to survive with AIDS as long as he did.

Following the sad revelation to Ron, he panicks huge because he assumed AIDS was exclusively a “gay disease”. As he learns that he’s going to die soon, he does everything in his hands to survive. At the same time, he also experience some change of heart — not as complete as Denzel Washington’s character in Philadelphia did, but it’s still a lot for how Ron was before the disease — in regards to his hatred towards gay people through his relationship with Rayon, who is at first his ticket to monetary reward from the AIDS-infected gay community but later Ron strikes a friendship with Rayon.

Jean-Marc Vallée’s camerawork enhances Dallas Buyers Club as he paints a grim film with a naturalistic view, having a steady focus on the characters and provides a picture of what it might feel like to live with a debilitating disease as well as what one can do against it. In the other side of the coin (opposite the AIDS patients), we also see Jennifer Garner as the sympathetic Dr. Eve Saks whose dealings with Ron makes her want to do a lot more for AIDS patients considering Ron’s club being useful and surprisingly successful, but she’s stuck within her own rules and work position.

All in all, Dallas Buyers Club is worth the watch due to its cast and for how Vallée conducts the story without sugar-coating its characters or the disease.