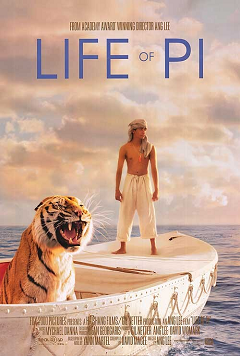 Translating a story like Yann Martel’s Life of Pi to the screen might have seemed practically impossible to those who read it years ago, but Ang Lee delivers to audiences through a visually impressive film like no other.

When a novelist arrives at his house for a meeting, a man named Pi recalls an epic journey that he was forced into long ago. When a ship he was travelling on during his youth sank, he ended up alone on a life raft with a Bengal tiger as his only companion.

The premise may seem a little out of this world, but David Magee does a fine job of adapting this fantastic tale. It has its issues, particularly in the way that the visual metaphors are often accompanied by an unnecessary narration from Pi, but these small things don’t diminish the film’s emotional impact.

Much of the film’s emotional resonance lies in Pi’s retelling of his journey, which was deeply spiritual for him. It’s a tale that chooses no religion in particular, and actually offers a tiny scope into more than one, allowing audiences of all kinds to benefit from what they’re watching. If only more people were as accepting as Pi of the importance of both the good and the bad, but more importantly, the importance of fantasy and reality.

The blurring of truth for the sake of story allows Life of Pi to shine most, as the film’s most imaginative sequences allow Ang Lee plenty of creative liberty. Never has a film utilized 3D in such a way to truly achieve such visually stunning results, and I say this having seen Avatar. The opening credits that simply feature animals in a zoo with gorgeous scenery, the editing and fading away of one memory to another, the reflection of the cloudy mornings and star-filled night sky against the still ocean; these things and many more are a testament to just how masterfully crafted the film’s visual effects can be.

Astonishing looks aside, the film also boasts Mychael Danna’s most ambitious score to date. The soothing, ethereal pieces give the sense of floating in water and drifting among clouds, which perfectly complements much of Life of Pi’s tone .

Most of the performances are great, notably those of Pi at all ages of his life. Overall, the actor with the most captivating performance is undoubtedly Suraj Sharma. His character, overwhelmed by the loss of his family and the fact that he is lost at sea with a Bengal tiger, shows us a powerful display of desperation. His performance is balanced in its dark and light moments, and one that will hopefully bring Sharma even more interesting roles.

Throughout all the dark events in Life of Pi, we are constantly reminded that there is always hope if one has faith, no matter where you place that faith. Nothing short of a visual masterpiece, it is clear that Ang Lee’s own spiritual journey in adapting Yann Martel’s novel proved to be a successful endeavor.