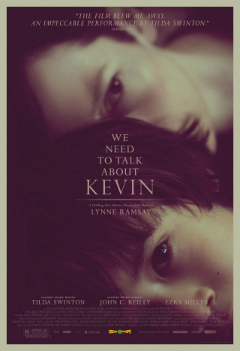 Have you ever wondered how a high school murderer was raised by his parents and how the parents have to live with this tragedy for the rest of their lives? Well, this is a film that takes you behind the scenes of the making of a monster and the aftermath of a massacre.

We Need to Talk About Kevin is a movie based on a novel written by Lionel Shriver and directed by Lynne Ramsay. It tells the story of Eva (Swinton), the mother of a teenage boy who tries to deal with her grief and feelings of responsibility because her child is the killer in a massacre at his high school.

Eva lives a joyful life with her husband Franklin (Reilly). All of a sudden, this happiness is interrupted by her unexpected newborn child Kevin (Miller). However, the father seems to be the only one glad about having his first child while Eva dislikes being a mother. This is only the beginning of Eva’s nightmare. As Kevin grows up he starts to break her down piece by piece.

Kevin doesn’t obey his mother and shows no interest in loving her. As time goes by the plot remains unclear, never really delivering real answers, only sharing that Eva’s unhappiness has, in some way, affected her son’s behavior. As Kevin becomes older, he acts strange, sometimes showing similar behavior to that of a sociopath. Eva tries to talk to her husband about her increasing concerns but he simply blames her for not understanding their teenager.

No one actually sits down to talk about Kevin. As an audience we are just waiting for this moment that never seems to come. Told in flashbacks, We Need to Talk About Kevin is a film that frightens as the story goes on. You can predict right from the start that this will obviously end in tragedy.

This film is not a typical drama. It is shocking and bleak. Lynne Ramsay’s direction is powerful. The film moves between dream and reality, where past and present are blended together with images of emotion.

A large part of the film’s success comes from its actors. Tilda Swinton’s Eva is one of the most powerful female characters of the last few years. After watching this movie, I can hardly understand why she wasn’t nominated in this year’s Academy Awards. Here she gives a more powerful, restrained and devastating performance than any of this year’s nominated actresses. John C. Reilly does a good job as the caring father. Still, it is not one of his best performances. Ezra Miller shines in one of his first roles as Kevin, the child from hell. He gives a captivating and repulsive performance and goes on the list as one of the new young actors to follow.

We Need to Talk About Kevin brilliantly captivates. It’s a film that brings up memories from the Columbine High School massacre and the recent tragedy in Utoya. This is definitely a film you don’t want to miss.