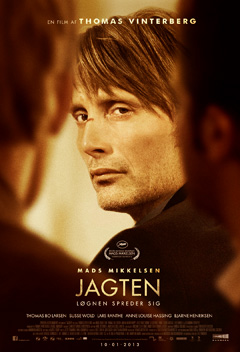 It’s seldom that a movie I wait for nearly a year to watch actually holds my attention that long, usually by its third month I’m tired of waiting, but for Vinterberg’s The Hunt, the expectations of the film grew, which isn’t actually good for films. I’m happy to say, however, that my hopes for the film were passed and that I’ve found a new appreciation for its simple poster.

The Hunt follows a man name Lucas (Mikkelsen), as regular joe as he can be. He’s been working as a teacher at a kindergarten where he’s the favorite teacher, because children just love him- and why wouldn’t they? He plays with them, he jokes, and is a total kid at heart. The parents in the small community that he lives in love him or respect him just the same, he even goes out drinking and hunting with all the tough macho fathers.

Lucas is best friends with Theo (Larsen) who is married to Agnes (Hassing), both parents of two children- a teenager boy and their baby girl Klara (Wedderkopp). Though we’re all sure they could be trying their best, Theo and Agnes are often seen neglecting their children, especially young Klara who is often set aside as they bicker on who should take her to school, where Lucas is her teacher. Lucas is such a cool teacher that nobody really blames Klara for having an overactive imagination and gets a little innocent crush on her teacher, giving her a small handmade present and a peck. Lucas taken a little aback explains things to her, but alongside an incident with Klara’s punk of a brother, makes Klara’s not so innocent lie snowsball into the thing that might destroy Lucas’ career and life.

The inhabitants of The Hunt part from the premise that children don’t lie, and as much as that sounds naive- it’s sadly what some people think. Children often tell you the blunt truth (Daddy, you’re so fat!), but they will also lie to escape trouble. That alongside incompetency would result in one of the most exasperating movie experiences (See: Compliance), but Vinterberg’s apt storytelling and direction, as well as all of the cast’s acting ability make The Hunt a very compelling drama. Three quarters into the film, it barely felt like we had been over one hour into the story, as the tension (and frustration) builds up fast and keeps up until its resolution, which did seem a little overlong even if I understood its intentions of telling us that things won’t ever be the same.

Though Mikkelsen does deliver a tour de force performance in here, and strong acting was found all around (including the kids Fogelstrøm as Lucas’ kid, and Wedderkopp); the most difficult roles to pull off personally were for Anne Louise Hassing and Susse Wold, who played VERY divisive characters in Klara’s mother and the kindergarten director, who was in charge of ruining (for the most part) Lucas’ life. Though the film doesn’t really judge anything and blame can be shared with all parties involved, I did kind of felt sad that all women we’re out to get Lucas. Even in that weird relationship Lucas has with her kinder co-worker Nadja (Rapaport), which always felt a little off as if they had to put him in a relationship with her just to make him not that creepy.

The most interesting aspect of The Hunt for me, however, is that it posed this question to me: what if your best friend (I’m unsure how long Lucas and Theo had been friends for) gets accused of abusing your child? Would you believe your child or your best friend? But that’s a question I don’t ever want to answer.