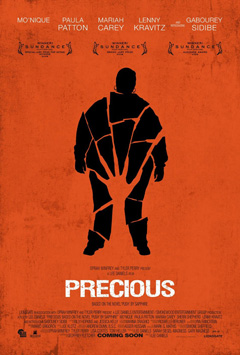 Precious seems to be one of the indie darlings for this upcoming award season, snatching many audience awards in several film festivals, and getting Mo’Nique loads of praise for her role as the title character’s abusive mother.

Precious tells the story of a 16-year-old girl who happens to be obese, illiterate and pregnant for the second time. She seems to be good at math, but this doesn’t seem to stop the principal of her school from kicking her out and letting her enroll for alternative schooling, where she meets other problem girls that are trying to get their diplomas to move on with their lives. She also meets Ms. Rain, who goes to the moon and back to help Precious out of her current life situation because that’s some crappy life she has.

The film isn’t perfect – most films aren’t – but at least it’s a film that will let its audience leave with something other than humming in their ears because of the explosions. Precious is a film about its characters and its acting. Gabby Sidibe, who plays Precious, does so wonderfully, you actually want to hug her to ease her pain. And hey! Mariah Carey can actually act! Who knew?

Moreover, it would be a pity if Mo’Nique decides not to promote the film and campaign for her win, though, because that’s half the fun for us! In her scenes, I felt bad whenever she yelled at Precious, and couldn’t keep my eyes away while she told her side of the story.

A good book adaptation is that which makes you want to grab the book as soon as you finish watching the film, even if the ending leaves you with a bittersweet aftertaste.