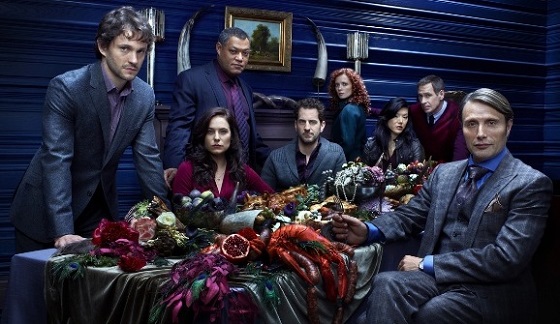 In Hannibal, two protagonists and two temperaments work symbiotically in opposition: urbane cannibal Hannibal Lecter (Mads Mikkelsen) and the “Brueghelian beauty ” his fellow killers aim towards, and socially uncomfortable investigator Will Graham (Hugh Dancy) and the repulsion of murder during and after the act.

Showrunner Bryan Fuller brings his previous shows’ themes of death and extraordinary abilities to this adaptation of Thomas Harris’ novels. The show is an alternate universe prequel to Red Dragon and Silence of the Lambs, incorporating lines from the books and visuals from the movies in ways that engage franchise fans and newcomers.

The only faults are random logic jumps in speech or action, which more or less fit the show’s surreal nature. Elaborate metaphor-filled dialogue suits odd-man-out Will, but some conversations in early episodes go overboard with whiplash conclusions from other characters. By episode six, “Entrée,” the dialogue consistency stabilizes, and the overarching plot dominates and incorporates all (if any) of an episode’s killer-of-the week elements. Thus begins an outstanding run through the eleventh episode, “Rôti.” The concluding chapters are solid, but feel inevitable compared to the previous momentum.

There’s also a smart undercurrent of humor, often macabre but always rooted in character. Hannibal, for instance, is happy to share his favorite cannibal puns with unaware dinner guests. It’s amazing how this show blends emotional tones, with multiple dynamics operating in every interaction. Symbols lurk in the background before taking center stage; melding nature and humanity, savior and murderer, dreams and reality, consumer and consumed.

In a way, the show is a (part-)Korean cooking drama. Hannibal is co-produced by the DeLaurentiis Entertainment Group, France’s Gaumont and South Korea’s AXN (which had some hilarious ads and more serious promotion), taking away production costs from American network NBC. The program also has a visual quality rarely matched on television, with cinematic shots of gorgeous color. Composer and music director Brian Reitzell also provides a menacing soundtrack, with insertions of vocal music for Lecter’s operatic moods.

Mads Mikkelsen is endlessly fascinating as Hannibal, “who represents privilege, power and integrity…[whose] character rests on his gender and the privilege that comes with it.” [1] Yet Hugh Dancy is equally captivating as Will Graham, an inward character who finds dogs easier to befriend than humans. Will grapples with his empath abilities in a manner more like the struggle of mind-powered female superheroes than that of humbled- then-triumphant male genius detectives. Though the show features white male leads, two canon characters are genderbent: Dr. Alana Bloom (Caroline Dhavernas) and ruthless reporter Freddie Lounds (Lara Jean Chorostecki). All recurring females are intelligent and independent characters; from colleague Beverly Katz (Hetienne Park), to young survivor Abigail Hobbs (Kacey Rohl) to Hannibal’s psychiatrist Bedelia Du Maurier (Gillian Anderson). There’s also a brief appearance by Gina Torres as Bella, the wife of FBI Behavioral Sciences boss Jack Crawford (Torres’s real-life husband Lawrence Fishburne).

There are never excuses for murderers who are aware of their actions, and there’s respect in the show’s approach to mental states and illness. Violence is stylized but not gratuitous. “Hannibal manages something that I don’t think I’ve seen in comparable crime shows: It forces the viewer to take on the weight of all that murder as surely as the characters do.” [2] Murder is such a common sight in media that the gravity of death must be reframed to truly disturb, not simply shock. Hannibal turns the viewing of horrible images into a catalyst for drama; as Will finds it increasingly tough to separate the acts of seeing, understanding, and becoming.