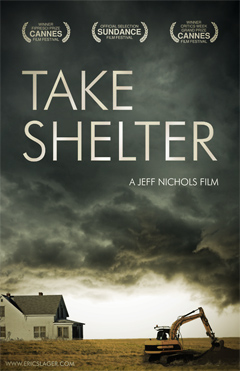 Jeff Nichols went around the film festivals with his latest work, Take Shelter. First screened at Sundance in January, it was then presented at Cannes, where it won the Critic’s Week Grand Prize, at the Toronto International Film Festival and many others. This only goes to show how promising of a director Nichols is.

In Take Shelter, we step into the life of Curtis (Shannon), a construction worker leading a quiet and happy family life with his wife Samantha (Chastain), and their six-year-old daughter Hannah (Stewart), who is deaf-mute.

Husband and wife live in perfect symbiosis and are learning sign language along with their dearest daughter until they can find a solution to her hearing problem. Everything is fine until Curtis starts having dreams of an impending apocalyptic storm, which quickly turn into nightmares and begin gnawing at his everyday life, mental and physical, in such a distressing manner that he becomes paranoid about the people surrounding him and the safety of his household.

Torn between his fear of mental illness and his catastrophic premonitions, Curtis decides to build an underground shelter in his yard, against his entourage’s better judgment. In a few days span, this shelter becomes the obsession that estranges him from his friends, work and family.

Nightmare or premonition? Is Curtis mentally ill or are the people around him simply blind? Those are the questions that haunt the spectator until the end. With Take Shelter, Nichols demonstrates a  great ability to juxtapose opposite climates. Without foreboding the viewer is thrown back into Curtis’ dark, unsettled mind, and forth into his quiet and stable surroundings. The director’s use of special sound and visual effects is equally perfect in the sense that they help create an atmosphere of horror and tension, without overtaking the entire film.

Take Shelter is a great movie, but some of its aspects can be perceived as annoying. First, is its length. On paper, two-hours may seem reasonable but in reality, trimming some of the scenes would have resulted in a much more powerful movie. Second, is its structure: one can either hate or love the fact that the movie does not end when it reaches climax. Personally, I think Nichols produced a stronger ending this way.

Despite its flaws, Take Shelter is definitely a movie worth seeing if only for the great acting performances of Michael Shannon and the ever present Jessica Chastain.