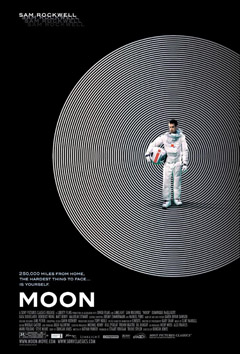 The film is an engaging personal dialogue on isolation between Sam Bell (Sam Rockwell) and what drove him to take a lonely job on the moon. As the sole caretaker of a mostly automated mining facility, which ships the much needed Helium 3 back to Earth, Sam can’t wait to get back home to his wife Tess and their three-year-old daughter, Eve. Deciding to work away signaled the deterioration of his marriage and began a de facto separation to see where things would take the relationship.

Only Gertie, the facility’s semi-intelligent a.i., keeps Sam company during the real time communications blackout of his term. Their surface level conversations are supplanted by the gym, copious amounts of T.V. dinners, pre-recorded movies and shows, building scale models of villages and tending a garden. These are the things that take up most of Sam’s time when not reviewing past messages sent by his wife. There’s a sense of the relationship being rocky and that Sam perhaps took the job to get away. One isn’t quite sure why things aren’t working out, but he’s had a lot of time to think about it.

The details of why the marriage was failing become clearer as Sam receives insight by literally confronting his problems head on and having a dialogue with himself to do it. In the most interesting way possible, he steps outside himself to see the man he was that led to where he is now.

Moon is a brilliant character piece that can work just as well as a staged play. It’s also an example of smart sci-fi that doesn’t need aliens and exploding planets to tell a great story. The movie visually recalls the earnest film making of the 70s, with sets that recall Silent Running and 2001, not to mention the use of miniatures for the outside scenes. CGI is kept to a minimum and it really works to focus one’s attention back to the characters and story.

Highly recommended for you smart people. The rest of you can watch Transformers 2.