Doctor Who Monsters Collection: The Master 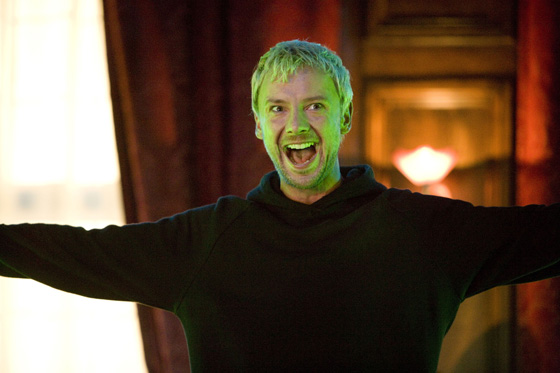 So you keep hearing about a British show called Doctor Who. Apparently it’s about a time travelling alien who looks human and has 13 lives with 13 bodies at his disposal. Apparently he travels with hot young Earthlings. And apparently the show’s 50 years old this year. Where do you start?

The Monsters Collection is an ideal introduction point for curious virgins and newbie fans. These recent box sets are centered around major villains of the Doctor, bundling together their first appearance from the classic series alongside their most recent episodes from this century’s revival. And Dr Who villains don’t get more major than the Master.

So yes, the Doctor is an alien. A Time Lord, to be specific, a race in charge of time travel. His arch rival is the Master, who’s a Time Lord gone rogue. Think Joker and Moriarty, but intergalactic. He’s a giant bastard, but these episodes don’t serve him well.

I’m aware 1971’s Terror of the Autons is regarded as a classic. It’s the Master’s introduction to the show, and he causes a lot of havoc. But it’s all a bit silly. His first kill for example is a scientist who he shrinks and hides in a lunchbox. It’s the kind of silliness which ruins his last appearance to date in The End of Time, the 2010 saga also featured in this set. He’s suddenly become a bouncing cannibal Eminem.  Oh, and he changes every human on Earth into his double, Aphex Twin style [1]. The world re-made in his image, in the most audaciously stupid cliffhanger the show has ever produced. You applaud, even if you don’t quite agree with what you’re seeing on screen.

Doctor Who has always been hit and miss, even in its current incarnation. It’s always done silly things, and very dark things as well. If you really want to see a classic Master episode, then watch the most exhilarating and essential sci-fi Britain has ever produced: season three’s Utopia/The Sound of Drums trilogy, from 2007. The Doctor and Master are played by the same actors, with the same writer, but it’s a whole other degree of class. Bleak, twisted and cruelly funny, these episodes show the Master at his best. He wins for the first time, and it’s horrific television. The Doctor turns deformed, the Master’s wife walks around in an abused haze, and there’s a disturbing, depressing reveal when you see what exactly’s in the deadly orbs which the Master’s been using to do all his evil bidding. I still can’t believe it was allowed to be shown at peak-time family viewing.

The ending is a bit silly though. But that’s Doctor Who, from now until the end of time itself.