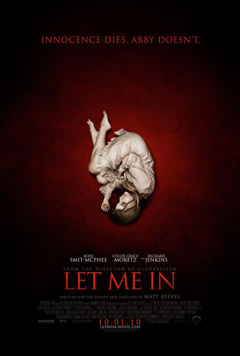 As many of you know, this film is Matt Reeves’s American adaptation of John Lindqvist’s novel Let the Right One in, which has already been adapted into the Swedish film of the same name.

First thing’s first — no, it’s not bad. At all. Reeves has brought a gentle touch to the film and handled both the horror and the relationship of Owen and Abby very well. The film is quiet, beautiful, terrifying and patient. Both of the two young actors inhabit their roles in a way that gives the roles wonderful nuance. It’s Smit-McPhee that stands out. He finds a mix of isolation and fear that is well beyond his years and will break your heart in a scene where he picks up a phone to call his father.

By now I’m sure you’re wondering whether it’s as good, nay, better than the original. I’m here to tell you that the question is irrelevant. Some will find the Swedish original as a masterpiece that should never have been re-interpreted. But I say that if this song was going to be covered, that it couldn’t have gone much better than this. Would I prefer that audiences see Let the Right One in instead of this? You bet. But if someone asked me whether they should watch this, Saw 3-D or Paranormal Activity 2 come October… the answer is simple.

There is a lot to like about Let me In, everything from the feelings it evokes of being bullied, to the violence it lets loose whenever Abby needs to do what she does best.

After the screening Matt Reeves expressed how big a fan he was of the original, and how hesitant he was to make this version. The former point will come through on the screen, the latter point speaks volumes about his character as a creative talent.

Whether or not you see it is entirely up to you. If we’re basing the decision on whether or not you feel the original should have been remade, I can follow your logic either way. All I would suggest is to come into it with an open mind and focus on what’s on the screen instead of what isn’t.