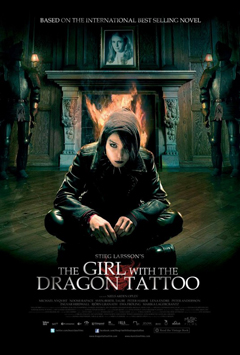 Hollywood has a rather bad habit of remaking successful foreign films. As of late, Nordic crime stories have been a prime target for source material. 2010 saw an American version [1] of Tomas Alfredson’s brilliant boy-meets vampire flick Let the Right One In. This Christmas, Stieg Larsson’s The Girl with the Dragon Tattoo is getting the Hollywood treatment [2] a la MGM with director David Fincher. Fincher has the advantage of being mainstream (The Social Network, Fight Club) and no stranger to directing thrillers (Zodiac, Se7en), so his version of Larsson’s Nordic noir and its sequels should reel in a wide audience. But before you head off to the cinema to see Daniel Craig and newcomer Rooney Mara kick ass and take names, you might want to watch the original Swedish version.

The first and definitely most interesting film in the Millennium series, The Girl with the Dragon Tattoo follows the exploits of edgy, antisocial computer hacker Lisbeth Salander (Rapace), and magazine publisher Mikael Blomkvist (Nyqvist). The unlikely pair are thrown together when Blomkvist, fresh out of a high-profile libel case that brings his career at Millenium magazine to an abrupt hault, is hired by elderly industrial tycoon Henrik Vanger (Taube) to reopen a murder case that has long gone cold. Realizing the enormity of his task, Blomkvist hires Lisbeth as his research partner. Their investigation plays out during the dark Swedish winter when the search for answers to one young woman’s disappearance leads them to come face to face with Nazis, corrupt government officials and a serial killer.

Director Niels Arden Oplev coaxes strong performances out of his cast, with the most impressive delivered by Noomi Rapace. As the violent and violated Lisbeth, Rapace is so invested in her character that it is difficult to imagine any other actress bringing as much sheer intensity to the role. Lisbeth is as cold and intimidating as her surroundings but Rapace gives her just enough spark to allow audiences to both sympathise with her and cheer her on.

Lisbeth turns the traditional concept of the femme fatale on its head. She is a demon — not really in disguise — and she doesn’t operate by means of seduction like the deadly women who made the black and white screen sizzle in the 1940s. Her attitude is as tough as her outward appearance and revenge on various Men Who Hate Women (referencing the literal translation of the Swedish title) is swift and brutal. Not one of them sees it coming until he’s being tazed in the groin or left with an amateur tattoo sprawled across his stomach to remind him that he’s “a sadistic pig and a rapist”.

If The Girl with the Dragon Tattoo sounds a bit disturbing, that’s because it is. Oplev’s film is moody, gritty, creepy and unapologetically in-your-face in a way that only European films are allowed to get away with. Yet the plot and pacing are so engaging that by the end of the film, you’re left with the feeling of having been through an acute experience. One of the hallmarks of a great thriller is its ability to leave you on the edge of your seat, waiting to see what happens next. The Girl with the Dragon Tattoo might actually leave you on the floor.