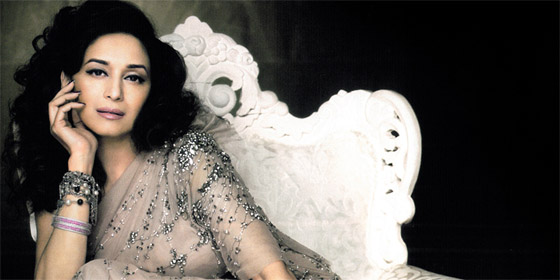 Today in India and Bollywood-and-entertainment-crazed NRIs (and ever crazier non-Indians like me) across the globe are celebrating Madhuri Dixit’s birthday! And as my friends and I would always recall of our friend Andrew; “Today is your birthday? HAPPY BIRTHDAY!”

As a new Bollywood fan and baby Madhuri-fan, I’m the least prepared person to make a list of her best filmi moments, a ranking of her most amazing and memorable numbers… or her most notable trivia. There are plenty of those out there everywhere on the web~ in fact, my current favorite -which I just stumbled upon last night- was this 15 Epic Dance Moves of Madhuri Dixit. Every newspaper, most Bollywood blogs, they’re all sharing their favorite moments of growing up watching Madhuri on screen.

I’m somewhat jealous of all of you.

I had just discovered Sanjay Leela Bhansali via Rani Mukerji and Black, and I was on my way through Devdas when I was hit with a bag of bricks and left dumbfounded by what I was seeing.

Of course~ Allah, Maar Dala [clip] — I was killed for sure. Who was THAT? And where have you been all my fandom life? I couldn’t describe what came over me after seeing Madhuri Dixit playing Chandramukhi. Actually, I do have a name for it. I once called that effect the Hit Your Face with a Meteor.

It was like magic, and Dixit kept doing it whenever I saw her smile and dancing on screen (big or small). The handful of subtitled movies I could get my hands on and YouTube clips (that you guys keep removing) kept me going, and it’s been nearly 8 months since then. I’ve been pestering my willing friends and family members to marvel themselves with the elegance and charm that Madhuri exudes — especially when dancing. They all -somewhat- fall for her… some more than others. Tsk, tsk, Nayeli.

In a couple of months, it’s going be one year since I started this journey [1][2], and though I’ve only seen a little bit over 200 films, I still haven’t seen anyone that could compare to the pure amazingness that Madhuri brings to not only the Indian silver screen, but the contemporary silver screen in general. There actually won’t be another one quite like her.

And yes, on a personal note, I DID make my own list on Why Madhuri Dixit Rocks to share with said friends and family.

Mrs. Dixit-Nene, have a wonderful day with your close ones. May you have many years of successes and plentiful love from your fans all across the globe.