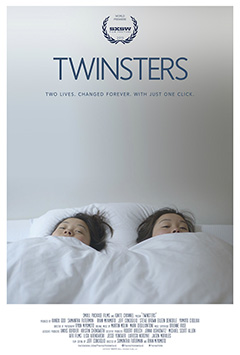 What are the chances? WHAT ARE THE FRIGGING CHANCES?? You log into Facebook one day to find a message from someone who was born the same day and same city as you, they were also adopted, and they look just like you.

That’s the story of American-raised actress Samantha Futerman when she got the message from French-raised Anais Bordier (and friends), who had spotted Sam on a YouTube video and noticed the similarities. In Twinsters, which was funded through two Kickstarter campaigns as well as some extra private funding, these young women set off to meet each other in real life for the first time, as they take a DNA test to actually confirm they’re related, meet each other’s families and friends, and return to South Korea for an encounter with their past.

The results? Sam and Anais’ energy is contagious, as they giggle and all of a sudden find that lost bond. They establish an instant sisterly SMS connection through Skype bubbles and emoticons, some of the better use of instant messaging interface I’ve seen on screen. I particularly enjoyed the editing montage of Sam leaving L.A. for London set to, if not mistaken, Kishi Bashi’s Philosophize In It! Chemicalize With It! [MV], which adds a certain exciting energy on its own. The production allows itself for some playful editing there to set up THE big moment. The first encounter. And it’s as surreal as serendipitous.

As the pessimist only-child that I am, I’m often one of those who’ll question the intention of finding the biological parents of adopted children, because… what if you don’t like what you’re digging up? However, Twinsters presents the unique opportunity to see two similarly identical people who grew up in completely different circumstances to shape the people that they became- It’s fascinating to see how Sam’s personality turn out to be due to being surrounded by siblings, compared to Anais’ actual loss of a sister and being raised an only-child with no real sense of belonging, and how that contrasts with their own personal quest to finding their roots.

Overall, the documentary will leave you with a silly grin… or some mist in your eye, as the other big moment puts the twins at the International Korean Adoptee Associations (IKAA) convention where they gathered with many of the close to 200 thousand Korean children who had been adopted by families from more than 15 countries in the last sixty years. Samantha and Anais are just part of the generation of the largest adoption exodus in the country [1].

Glee’s Jenna Ushkowitz serves as executive producer for the film, as well as Kristin Chenoweth serving as associate producer.

Twinsters will be playing through the last days of July, first weeks of August until mid-August in several cities in the US. Check out the trailer or Facebook page for showtimes.