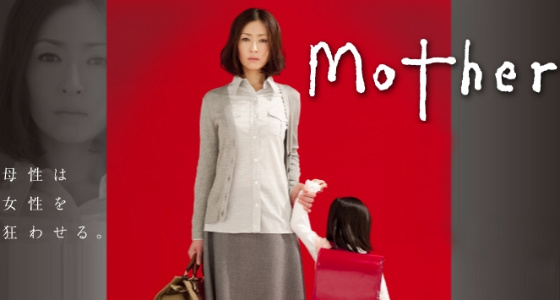 Mother is an 11-episode Japanese drama that follows bird migration scientist Nao Suzuhara (Yasuko Matsuyuki), who works as a science teacher in an elementary school. One day, the attending head teacher gets sick and she’s asked to take over the class, where she meets Reina Michiki (Mana Ashida), a precocious little girl who wonders whether or not there is a Heaven.

Mother is pretty much a full-on drama that deals with various issues such as child adoption, foster parents, parent abuse, and the more taboo subject of the spousal abuse. It puts problems with the system forth, and brings on ethical questions every step of the way… except when the journalist comes in. His character is just crappy altogether.

What is wonderful about Mother is that it is a story of different types of mothers, and we’ve got wonderful actresses playing them throughout. From Yasuko Matsuyuki playing a mother forced into her role, to Atsuko Takahata playing the overbearing but caring kind, to Yuko Tanaka playing the guilt-ridden one, and Toshie Takada playing the nearly-forgotten foster parent — though only for one episode, it’s by far one of the most heart-wrenching moments in the show.

Something noteworthy in this drama is the performance of Mana Ashida in a breakthrough role that not only lets her play a regular child with a cute demeanor, but also lets her play a much sharper precocious little girl that always knows what’s going on and endures much more crap than any of us would in real life. She is cute when needed, she breaks your heart when she wants to, she is sassy without ever being annoying, and holds your attention on the screen as if she’s been born to be on it.

Please, look it up and watch it. You won’t be disappointed.